PM: Sabah and S’wak will be equal partners

KUCHING: The Federal Government will not let up in efforts to restore Sabah and Sarawak as equal partners in the Federation of Malaysia, Tun Dr Mahathir Mohamad said.

The Prime Minister said these efforts would go on although a Bill to amend Article 1(2) of the Federal Constitution in April did not obtain the two-thirds majority in Parliament.

The Bill sought to restore the status of Sabah and Sarawak as equal partners in accordance with the Malaysia Agreement 1963 (MA63) instead of as the 12th and 13th states.

“In line with this, the government has set up a special Cabinet committee to review the implementation of MA63.

“All 23 committee members, who include federal ministers and the Chief Ministers of Sarawak and Sabah, have met several times to discuss this in detail, ” Dr Mahathir said at the national-level Malaysia Day celebration at the Indoor Stadium here last night.

He also said the Federal Government had agreed to hand over the administration of Pulau Sipadan and Ligitan to Sabah, except in matters related to security.

This was a result of the special Cabinet committee’s negotiations and reflected Putrajaya’s commitment to fulfilling MA63, Dr Mahathir added.

“We hope the people and leaders of both states will be able to see our commitment and sincerity to recognise Sabah and Sarawak as equal partners with the peninsula, as was the case when we formed Malaysia together, ” he said.

At the event, the VVIPs struck the bedok (Sarawak Malay drum) in unison with 170 other drummers to launch the celebration.

This was followed by the beating of 300 drums comprising the rebana ubi, Chinese drum, Iban dumbak and bedok, backed by a silat performance with a display of pyrotechnics.

Other highlights included a shadow play portraying friendship, unity and nation-building, a video presentation on the formation of Malaysia and a sketch illustrating the nation’s progress from the past to the present and future.

There were also cultural performances showcasing Sarawak’s rich traditions and diversity through a mix of traditional and modern dances.

Teens sing for a better Malaysia 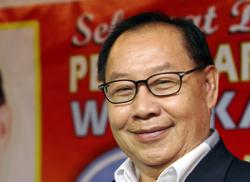 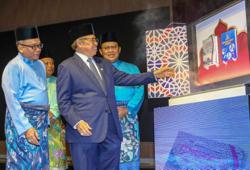 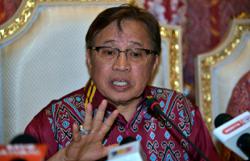