A file picture of firemen dated Sept 14, 2019 at a farm in Kg Johan Setia in Klang where open burning was carried out. This practice has worsened the haze situation enveloping the country. – Bernama

He said such stern action was required as farmers, especially in the Johan Setia area here, were still carrying out open burning despite the being issued orders from the state government to stop the practice.

"Open burning for carrying out agricultural activities has, to some extent, worsened the haze situation hitting the country.

"However, we will ensure that confiscation (of such land) is done according to the set procedures and processes as it is not easy to seize these plots of land – some are leased out or encroached upon for growing vegetables," he told reporters after attending the Yayasan Selangor Debating and Elocution Competition XI, here, Monday (Sept 16).

Amirudin said so far, no errant farmers had been arrested as they carried out open burning at night or in the early morning.

"When we went to such locations, land owners were not there and we do not know their whereabouts. But we have to put out the fire before looking for those who are doing the open burning," he added.

According to the Environment Department website as at 2pm Monday, the Air Pollutant Index (API) readings in Johan Setia is 204, Klang (150) and Banting (155) respectively. 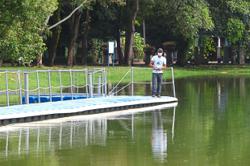