Feature: A school of their own

Functional design: The Genius Kurnia centre is purpose-built for children with autism.

THERE sits an unusual looking building along Jalan Sentul Perdana in Kuala Lumpur.

At a glance, it looks like a giant Swiss cheese from the Tom and Jerry cartoon show – half of its main front exterior is a large yellow wall inlaid with round holes. The Swiss cheese motif is replicated in the walls surrounding the building in cheerful tones.

The unique design is not just for artistic purposes though, as it is created specifically to reduce visual disturbance and noise.

This is the Pusat Genius Kurnia, a government-run purpose-built centre providing pre-school education and early intervention for children six years and below diagnosed with autism spectrum disorder (ASD). It is one of the few buildings in the country specially designed to accommodate children with autism.

Architect Mumtazah Mustajab planned the centre by drawing inspiration from the experiences of her 13-year-old son, Najib Mohamad Fathullah, who has autism.

“I try to enter into his world and his mind to understand what he wants and what he needs,” she says.

“Many children with autism also have sensory issues. This is why we need an environment that helps to keep them calm and not further aggravate their senses,” autism specialist Dr Hasnah Toran says, explaining the importance of having specially designed buildings and facilities.

Genius Kurnia started operations in 2014 and every day, demand is increasing. With an increase of autism diagnoses, more establishments like it are needed.

According to the Genius Kurnia Management, there is definitely a necessity for more centres as there is a steady increase in the number of individuals diagnosed with autism.

“When our waiting lists open in November, we immediately get over 300 applications,” the management tells Sunday Star, explaining that the spots fill up quickly and applications close after two weeks.

In the school, each child has their own individual education plan and parents are also given support through parent education, consultation and counselling. To help promote awareness, Kurnia provides free online courses in English and Malay for parents, teachers, and members of the public.

This is in addition to monthly workshops that the centre conducts for parents.

In April this year, Education Minister Maszlee Malik said that the programme, originally named Permata Kurnia, would be rebranded to “Genius” and relocated from the Prime Minister’s Department to the Education Ministry.

Genius Kurnia charges on a sliding scale depending on the household income of each family, but nevertheless strives to maintain accessibility and affordability for its students. 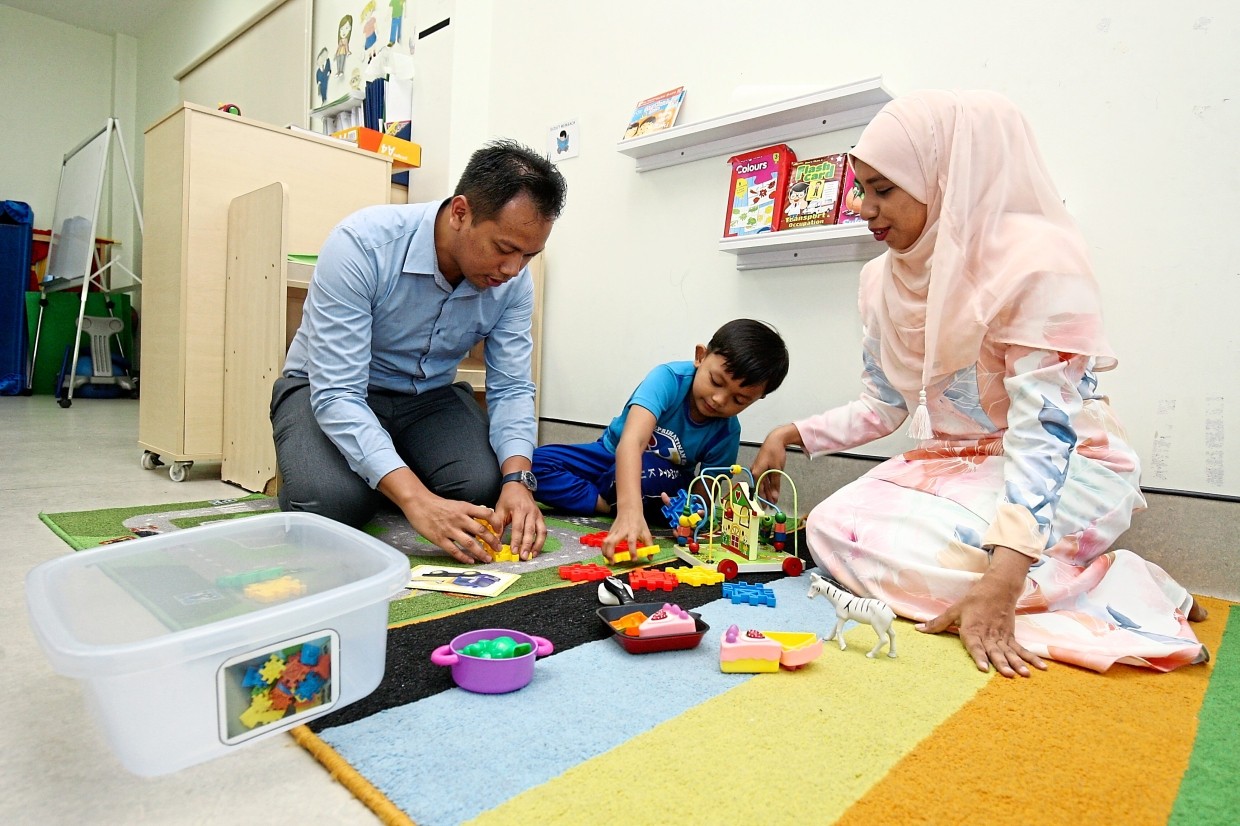 Muhammad Ammar, who has autism, playing with toys with his parents Dr Nur Farhana and Dr Mohammad at Genius Kurnia.

After four to five months on the waiting list, six-year-old Muhammad Ammar who is diagnosed with autism, was accepted into Genius Kurnia and quickly began making strides.

His mother, Nur Farhana Mohamad, credits the substantial improvement in her son’s learning to the specialist teaching, wide range of facilities and support given to parents at the centre. The support, according to Nur Farhana, even extends beyond the classroom and parents are taught how to continue the education at home.

“His personal progress is tremendous. He is not the same Ammar that he was a year ago,” she says.

The Genius Kurnia centre was a welcome opportunity for Nur Farhana to get the best specialist education at a reasonable cost. Prior to this, Nur Farhana would send her son to weekend private therapy sessions costing RM150-180 per hour.

Even though Genius Kurnia is comparatively affordable, and both Nur Farhana and her husband are working as doctors under the Health Ministry, they still face financial difficulties in terms of logistics.

“We are working in Putrajaya and my son attends classes in the Genius Kurnia centre in Sentul. At first we hired a driver at RM2,000 a month to send him to and fro every day. Now we have rented a house in Sentul and my husband and I commute every day to Putrajaya,” says Nur Farhana, who pays less than RM500 monthly at Genius Kurnia.

She hopes that more centres will open up across the country to cater to those outside of the Klang Valley.

Sharliza Sallehuddin has been waiting two years to get her four-year-old son into Genius Kurnia.

“Not all early intervention providers have both occupational and speech therapists so I need to send my son for separate therapy sessions,” she says. “Additional centres would bring benefit to a large group of people, particularly individuals who are unable to pay for private care.”

Despite the wait, Sharliza still hopes to enrol her son in Genius Kurnia as she has received good feedback from her friends who have managed to secure places for their children there. 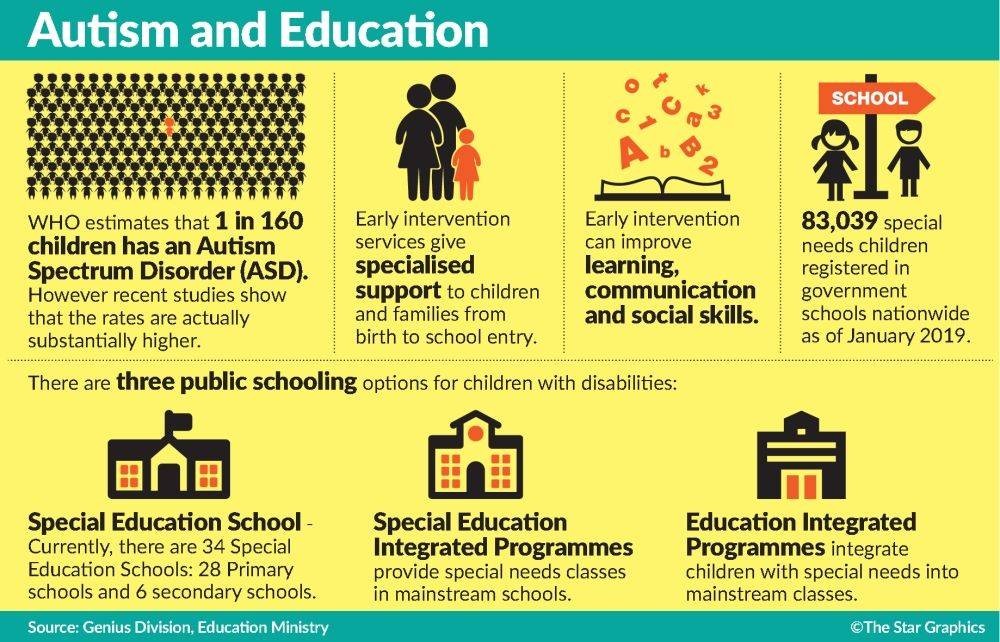 Parked under the Women, Family and Community Development Deputy Ministry, Nasom provides early-childhood intervention centres throughout Malaysia but these centres too, specifically the ones located in urban areas, are filling up to the brim.

“Most children with autism need one-to-one attention. The difficulty we face is that our centres must have a low ratio of teachers to students. It is usually one teacher to three students and at maximum, two teachers to seven students,” she says, adding that each Nasom school can take at most 60 students.

Currently in Malaysia, there is no official registry for the number of individuals diagnosed with autism. However, Feilina points out that one can get a rough idea of the prevalence of autism in Malaysia by analysing the national gross birth rate per year.

According to the United States’ Centers for Disease Control and Prevention (CDC)’s Autism and Developmental Disabilities Monitoring (ADDM) network, approximately 1 in 59 children are identified with autism.

“If we compare that to Malaysian numbers, we are looking at 8,000 to 9,000 born yearly that might have autism,” Feilina says.

At present, Malaysia does not have enough facilities to provide for this, she notes.

Financial constraints further compound the problem. Where Nasom once had 20 centres, they are now only left with 15.

“We could not continue maintaining the five the centres, especially in this economic climate. It is difficult to find money and so we are looking at different avenues for funding, either by hosting events, looking for corporate sponsors or organising fundraising activities,” she says, adding that Nasom plans to open a sixteenth centre next month.

To keep services accessible, Nasom only charges between RM450 to RM600 per child in the Klang Valley while in Penang and Alor Setar it is RM300.

Altogether, Nasom spends about RM1,000 per month on the education of each child and has between 550-580 students nationwide.

Private centres can cause financial strain as many cost upwards of RM2,000 per month, says Feilina.

While it is vital for both private and public sectors to provide early-intervention services, Feilina cautions against the mushrooming of unaccredited centres.

“It is important to maintain the quality of training of teachers – they have to have special education qualifications if they are to teach children with special needs,” she says.

New facilities in the pipelines

To address increasing demands, two more Genius Kurnia centres are currently in the works; one in Kedah and another in Melaka.

According to the Education Ministry’s Genius Division, the physical construction of the buildings is expected to commence mid-2020.

In Putrajaya, an Integrated Early Childhood Education Centre which can accommodate 134 children with autism alongside another 266 students is expected to be complete by the end of this year.

In an email response to the Sunday Star, the Genius division says it is providing new and flexible initiatives to be implemented at various schools, centres and other institutions. These include developing online training on the zero reject policy, special needs education and classroom intervention for members of the public.

Private centre operators and teachers are also being given training on early intervention while expert consultation is available for states and non-government agencies.

One of the problems faced in expanding special needs pre-school education is financial, but this can be rectified by diversifying the source of funding, says National Education Advisory Council member Datuk Satinah Saleh.

One solution is to increase government-private sector collaborations.

“When the private sector can be part and parcel of an initiative with the government, then we can say that Malaysia is really moving forward in considering education for all,” she says, acknowledging current financial restraints within the government.

Places like Genius Kurnia are special in that everything is considered and specifically designed for individuals with autism. However, the cost of building and maintaining the centre is also high.

Satinah feels that although there are private centres and affordable centres set up by religious bodies or NGOs, there should be more options for parents.

The introduction of the Zero Reject policy by the Education Ministry would help in ensuring that no child gets left behind, she says.

“A lot of initiatives are being done, especially in trying to raise money. There are many kind-hearted members from the private sector out there who are willing to take up Corporate Social Responsibility (CSR) initiatives aimed at children with special needs. The Ministry, however must help facilitate the involvement of private sectors in these public private partnership (PPP) initiatives more effectively and efficiently.”