A drug addict at just 13

ALOR SETAR: It is a predicament that no mother will want to be in – see her only son drop out of school and become a drug addict at 13.

Sadly, this is the situation faced by odd job worker Nor (not her full name) who is praying fervently that her son Atan will turn over a new leaf.

The teenager, a slow learner, was tested positive for methamphetamine during a random call by the National Anti-Drug Agency (AADK) at his home in Kuala Kedah yesterday.

Nor, 41, said her son mingled with bad company which led to his involvement in drugs.

“He mixed with a youth in the village called ‘Botak’. He said the youth asked him to help catch crabs for which he would be paid some money.

“But instead of money, my son was given syabu. I only want Atan to get back to school, ” said the divorcee.

Nor said five other boys in the village had also been seen in Botak’s company.

“I lodged two police reports when Atan did not return home for a few days three months ago. I hope police will act, ” she said.

Nor said her son used to attend classes at a school nearby from Year One to Year Four. After that, she said she sent him to a religious school in Pendang when he refused to go to school during Year Five.

“He went to a tahfiz but was forced to stop due to bullying there. I then sent him to another religious school in Tunjang and again, he was bullied by classmates.

“The bullying stopped when I spoke to the ustaz (religious teacher) at the school.

“But he had to stop schooling anyway as I could not afford the RM250 monthly school and laundry fees, ” Nor said, adding that Atan has been staying home since last year.

AADK Kota Setar and Pokok Sena preventive unit chief Suria Azlina Shaarin said Botak was placed under their “Home Watch programme” (OKP) but had gone missing.“We will act against him for not reporting for rehabilitation and for failing to follow our programme.

“As for Atan, we will refer him to the district welfare office. The child protection team will come and take him and the other teenagers. We will discuss Atan’s future with his mother, ” she said.

Malaysia Crime Prevention Foundation (MCPF) Kota Setar president Dr Zaki Zamani said Atan could have been influenced by his 13-year-old cousin who was also a dropout.

“We believe a neighbour who is a drug addict has been supplying them with drugs over the past few months. I alerted the state Education Department on the matter. The department needed a urine test done by AADK before action could be taken, ” he added. 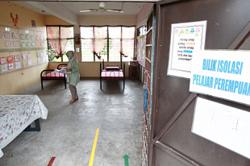 Schools gear up for new normal

40 injured in stabbing at primary school