The girl’s brother found them having sex in a bedroom in their home in Penampang, Sabah.

“The boy had admitted to having sex with the girl at least four times.

“He also said that he was influenced by pornography he saw on a smartphone, ” DSP Mohd Haris said.

The Year Five pupil is now being remanded for investigation under Section 376 of Penal Code for rape.

> The body of a man, believed to be a murder victim, was found floating in a water tank in Kampung Delek in Klang, Kosmo! reported.

Passers-by found the unidentified man wearing only a pair of jeans at 8.54am on Thursday.

> Actress Nur Fazura Sharifuddin had a creepy encounter with a ghostly figure while she was filming the horror film Dendam Pontianak, Berita Harian reported.

Nur Fazura, who was playing the role of the pontianak, recounted how she saw the female form, dressed similar to her character during filming two years ago.

The 35-year-old said the encounter occurred at about 3am while she and the production crew were having supper.

“A crew member said there was a figure behind me. I thought he was joking but when I turned around, I saw a female figure wearing the same clothes as the costume I had on, ” she said.

“Her face was covered with long hair. Thankfully, nothing unfortunate happened.”

Nur Fazura said she was grateful that she did not feel any discomfort throughout the filming process. 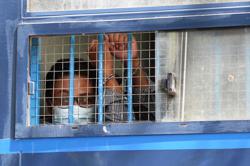