MERS 999 is exploring new approaches to boost its service. But the emergency hotline still receives too many prank calls. Some 5.8% of calls are for non-emergency situations.

HELP is a call away and these days, all it takes is a tap of a button.

Malaysia’s emergency hotline, 999, went beyond phone calls when it introduced smartphone apps for the service, making it easier to reach for help. Now, the Federal Government wants to further improve the Malaysian Emergency Response Services or MERS 999.

This is to ensure that it stays effective and in line with current technological advancements, especially as Malaysia enters the Fourth Industrial Revolution.

“The MERS 999 service has embraced technology with the development of the SaveME 999 apps, namely SaveME 999 POLIS, SaveME 999 BLIND and SaveME 999 DEAF.“The government is also exploring new ideas and approaches. It is considering setting up a new public reporting mechanism by enabling the public to submit information and handle emergency incidents,” Telekom Malaysia Bhd (TM) told Sunday Star when contacted.

TM operates the MERS 999 service and its three response centres in the country, namely in Kuala Lumpur, Melaka and Kuching.

TM adds that the government, through the Communications and Multimedia Ministry, is also engaging with other agencies to develop new requirements in line with standard operating procedures for different types of emergencies.

Currently, while emergencies can be reported by dialling 999, Malaysians can also use their mobile phones to call 112 – the number for the general public to call using their mobile phone when there is an emergency.

However, the service still faces challenges involving public awareness about the service, including people who call for non-urgent situations. About 5.8% of the total 13.3 million calls received last year were categorised as “non-emergency” calls.

Examples include calls for help about punctured car tyres and asking for phone numbers.

The system also receives crank and prank calls every month – an offence under the law.

“These calls will be reported to the Malaysian Communications and Multimedia Commission. Such incidents will be discussed with the relevant telecommunication providers for further review and action,” TM says. 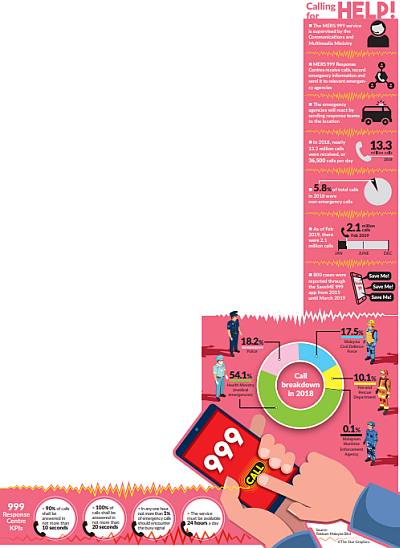 Currently, any individual found to be improperly using network services can be fined up to RM50,000, jailed for up to a year or both, under the Communications and Multimedia Act 1998.

“The government hopes that public awareness about this service has increased as this will help to reduce unnecessary calls such as prank and crank calls significantly,” says TM.

Last year, the MERS 999 service received an average of around 1.1 million calls per month or 36,500 calls per day.

“This year, the service has handled 2.1 million calls as of February,” TM reveals.

A total of 800 cases were reported through the SaveME 999 apps from 2015 until March this year. The SaveME 999 mobile app was launched in 2013. User-friendly versions for the deaf, blind and disabled communities were introduced in 2017.

“The government and TM have worked hand in hand to promote and encourage the usage of SaveME 999 apps.

“Today, we have managed to get over 63,000 app downloads from the App Store and Google Play Store,” says TM.

As for claims by some that their emergency calls were answered late or not at all, TM says all public complaints will be investigated to identify and verify the facts based on data recorded.

“It is the priority of the ministry, agencies involved in handling emergencies and TM’s top management to ensure that all emergency calls are given immediate attention.

“In general, the findings show that all emergency agencies met their standard operating procedures and the complaints were solved professionally,” it explains.

Previously, there were claims by the public about slow response in getting help after calling 999.

In November last year, local singer Talitha Tan posted on her social media account that she had called for help after witnessing a car crash. However, she claimed that the person who answered her call asked for the location of the accident five times.

Tan also said the police called her half an hour later to confirm if she was the person who reported the incident, but she had already gone home by then.

However, it doesn’t help that some Malaysians are still not fully aware of the importance of the MERS 999 service and call up for fun or for situations which are not urgent.

Commenting on public misuse of the 999 hotline, Federation of Malaysian Consumers Association chief executive officer Datuk Paul Selvaraj says more should be done to educate the people about the MERS 999 service’s purpose and benefits.

Its developments in keeping abreast the times should also be communicated to the masses.

“As for prank calls made to the hotline, I urge parents to advise their children against making such calls. This is because it could interfere with a real emergency call,” he says.

He adds that constant abusers of the service should be given a warning and be subject to action under the law, if necessary.

Malaysia Crime Prevention Foundation senior vice-chairman Tan Sri Lee Lam Thye says the need to improve the 999 service is essential to better aid people in need.Such situations could be literally be a matter of life and death, after all.

“The use of today’s latest technology and devices can ensure that vital information is forwarded to the respective authorities more quickly and efficiently,” he says.

Lee suggests that even related agencies like the Road Transport Department can be contacted in the event of road accidents to facilitate traffic, aside from ambulances rushing to the scene to rescue victims.

Frowning upon Malaysians who make prank calls to the emergency hotline, he says such actions waste resources that can be used to address real needs.

“More educational campaigns should be implemented to reinforce the proper usage of 999.

“People should be responsible and not misuse it for hoaxes,” he adds.