He pleaded not guilty to seven counts of corruption before Sessions Court judge Azura Alwi here on Wednesday (June 26).

Dr Ahmad Zahid, 66, who was then deputy prime minister, was charged under his capacity as the Home Minister.

He was accused of committing the offences at the deputy prime minister's official residence at Seri Satria, Presint 16, Putrajaya between March 28, 2017, and March 2, 2018.

The offences were framed under Section 16(a)(B) of the Malaysian Anti-Corruption Commission (MACC) 2009 and punishable under Section 24(1) of the same Act.

Dr Ahmad Zahid faces a maximum jail time of 20 years and a fine of no less than five times the amount of gratification or RM10,000, whichever is higher, if he is convicted. 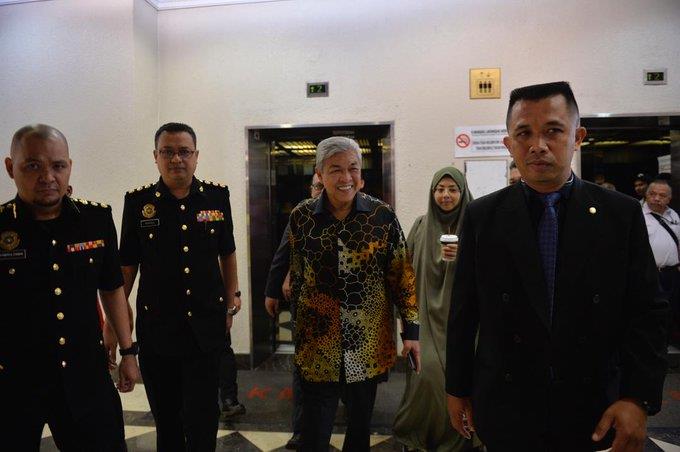 "The accused also needs to surrender his passport to the court," he said.

Dr Ahmad Zahid's lawyer Kitson Foong did not object to the amount and said his client had already surrendered his passport to the court during his previous corruption charges involving Yayasan Akalbudi.

The Bagan Datok MP, who wore a dark coloured batik shirt, arrived at the Kuala Lumpur Court Complex around 8.30am with his daughter Datuk Nurulhidayah and son-in-law Datuk Saiful Nizam Mohd Yusoff.

Dr Ahmad Zahid is now facing a total of 54 charges in court.

These include the seven new charges, 12 counts of criminal breach of trust amounting to RM21mil, eight graft charges involving RM21mil and 27 counts of money-laundering totalling up to RM72mil.

Dr Ahmad Zahid is expected to be charged with another 33 charges involving the same VLN scandal at the Shah Alam Sessions Court on Thursday (June 27).

Zahid at MACC HQ for appointment

Zahid to be charged today