The students completed their foundation studies at the Universiti Pertahanan Nasional Malaysia (UPNM) this year.

US Ambassador to Malaysia Kamala Shirin Lakhdhir said the three underwent vigorous administration processes before they were accepted.

She said 71 countries were invited to nominate candidates to enrol into each of the service academies, with 15 international candidates accepted into each academy.

"Less than 20% of the international candidates were selected.

"The selection process is very vigorous and competitive. "All candidates are evaluated on their academic performance, physical aptitude, character and leadership potential.

"This is not just a test. This is a set of interviews where these three candidates had to prove who they are as people and what they hope to bring back to Malaysia," she said in a speech at her residence here.

The family and friends of the three youngsters were in attendance to witness the three receiving their appointments from Kamala.

Only 30 Malaysians have graduated from American service academies since 1971, with another six in the midst of completing their training.

Each year, about 1,200 students are admitted into each of the three academies.

Graduates of all these three academies receive a Bachelor of Science degree. 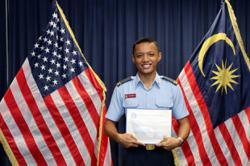 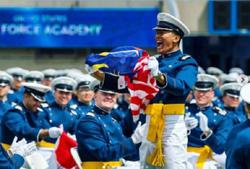