KLANG: Several places in Klang were thrown into chaos after their water supply came to a sudden halt on Sunday.

The cut was due to damage to the Klang stretch of the West Coast Expressway (WCE) project site from soil movement which caused a part of the road to sink as well as some parts of the retaining wall to crack.

Some 80 houses and 30 shops were flooded in waist-deep muddy water on the day of the incident.

Selangor Mentri Besar Amirudin Shari, who visited the site yesterday, said the pipes were the major providers of water to Klang.

“We are doing the repair work now and the 1,400mm pipe is almost complete, and we can distribute the water to the Lipat Kajang catchment pond, which channels water to areas that are currently affected, once it is ready,’’ said Amirudin.

He added that water would resume in stages and expected it to return to normal in 24 hours. 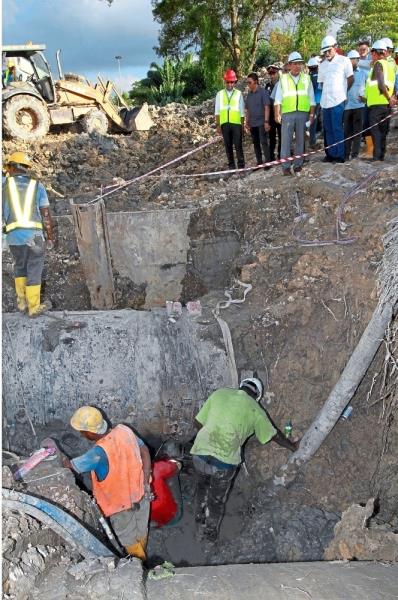 Repair in progress: Dr Xavier visiting the site of the ruptured pipes in Klang.

“We have almost completed the repairs on the pipes but there was soil movement again last night (Monday) and when this happened, work had to be stopped to prevent bigger problems,’’ he said, adding that work after that concentrated on mitigating further damage.

Amirudin said had the mitigation gone smoothly without the soil movement, 30% of the water supply would have resumed by yesterday.

According to him, some 74 Pengurusan Air Selangor Sdn Bhd (Air Selangor) water tankers had been dispatched to the affected areas.

“We have also provided about 20,000 five-litre mineral water bottles to be distributed given that it’s the month of Ramadan.

“I know that it has created much hardship but we will overcome the water disruption as soon as possible,’’ said Amirudin.

Water, Land and Natural Resour­ces Minister Dr Xavier Jayakumar said he had asked the National Water Services Commis­sion (SPAN) to open an investigation into the matter.

He said he would also ask government agencies such as the Survey and Mapping Department and Mineral and Geosciences Depart­ment to look into the soil movement in the area.

SPAN chairman Charles Santiago said investigations had already started to identify the cause of the mishap.

“WCE, as well as other relevant parties, will be called in to explain and if found there was negligence on their part, charges will be initia­ted against them,” he said.