PETALING JAYA: Continue with bold reforms, change weak policies and do not forget promises made, no matter how small.

These are three main things the Federal Government needs to do over the next six months to remain on track in keeping its election promises, said Institute for Demo­cracy and Economic Affairs (Ideas) director of research and development Laurence Todd.

Given that the rising cost of living is a big concern among Malaysians, the government has taken action to address price hikes.

However, Todd said, these measures have had limited impact.

This is because the cost of living is also tied to income and consumption habits.

“In the next six months, the government should focus more on increasing incomes rather than controlling prices,” he said.

Todd was commenting on Council of Eminent Persons chairman Tun Daim Zainuddin’s statement that the Pakatan Harapan government needed another six months to repair the damage left by the previous government and bring the country back on track.

Speaking to the media after attending an event in Kuala Terengganu on Sunday, Daim said Pakatan’s loss in the recent Rantau by-election was part of the challenges that must be tackled as people were losing their patience.

“I think the government needs another six months to fix the situation, not only in terms of economic development, but also in other issues.

“The people need to understand this,” he added.

Todd said the government needed to change its approach in some areas.

“One example is housing. The government’s current policies are insufficient (to fulfil Pakatan’s pledge) to build one million more homes,” he said.

Ideas recently released a detailed report card on Pakatan’s performance in delivering on its manifesto pledges relating to the economy since winning power in the 14th Gen­eral Elec­tion last year.

The report card, titled “Projek Pan­tau”, noted that the government is performing reasonably well in meeting its manifesto commitments and that nearly one year into its term, over 29% of the coalition’s economic promises have either been achieved or are on track (see graphic).“Some of the ‘quick wins’ are already behind the government, for example the abolition of the Goods and Services Tax, but we hope the government can improve its score by a further 10%-20% at least over the next six months,” said Todd.

To boost its score, the government will need to stay focused on implementing promises in areas where it is already moving in the right direction.

“An example is public procurement. The government has an ambitious plan for reform, but the test will be implementation.

“If the government brings forward the Government Procurement Act in the next six months, that would be a strong signal of progress,” added Todd.

While the government should concentrate on delivering its major pledges, Todd said it should also not forget the ones that do not get a lot of attention.

These include Pakatan’s promise to preserve orang asli customary land rights and welfare, and honouring its pledge to ratify the 1951 United Nations Refugee Convention and give refugees in the country the right to work.

Todd said political arguments often end up overshadowing the discussion on policies and what the government has done.

“The government is implementing many important policies but political stories continue to dominate,” he said.

He added that the government needs to stay as focused as possible on policy, not politics.

“This is never easy, but these first few years in office is the time to make real change.

“They need to make the most of it,” he said.

Another initiative for monitoring Pakatan’s performance is Open­Promises Malaysia, a non-partisan project that records and tracks promises made by politicians and Pakatan.

Its founder Nazreen Mohamad said the government needs to put in more work when it comes to addressing the rising cost of living as it is a big concern among many Malaysians.

“Earlier during its term, Pakatan made progress with measures such as the affordable Rapid bus and rail pass, MySalam B40 National Prot­ection Scheme as well as the reduction of broadband prices.

“It also talked about abolishing toll collection,” he said.

However, he added, the government has since appeared to shift its focus towards reviewing the previous administration’s mega-projects such as the East Coast Rail Link and High Speed Rail.

“They are fulfilling other promises but when it comes to the cost of living, the progress appears to have slowed down,” said Naz­reen.

He also said OpenPromises estimated that of the 300-plus promises made by Pakatan, 22% of them are in progress while 6% have been fulfilled. 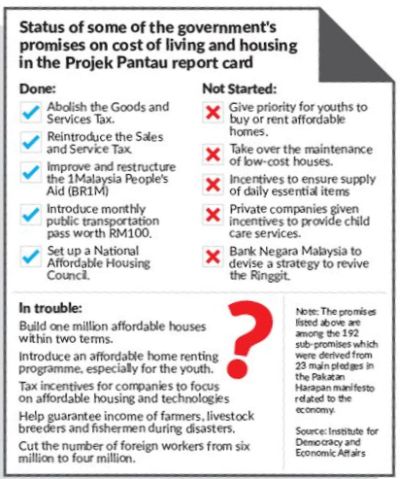 Capital controls should only be a last resort, says economist