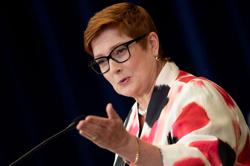 Maradona was "the greatest of them all," says Argentine president

ALOR SETAR: They were invaders. Yet, there stands a monument here that honours them as heroes.

Three Japanese soldiers who tried to blow up Alor Setar Bridge to cut off the Allied Forces during World War II were hailed as war heroes with the granite monument.

It caused a social media uproar, with many Malaysians wondering how invading troops ended up being decorated as such.

The monument was set up in Jalan Raja by the state Museums Board with the Kedah History Society and the Japanese Consulate-General in Penang.

Photographs of the opening ceremony were posted on the Kedah Museums Board Facebook page which promptly led to Malaysians lambasting online that the monument was a “big mistake”.

Many called the monument an insult to the nation’s struggle for independence and to the Malaysian army.

“My ancestors were killed by the Japanese. But I take it that the Kedah government is proud of the invaders. What an insult,” someone wrote.

Mohd Asmirul rushed to act yesterday by first removing signboards set up near the monument.

The signboards, which were in Bahasa Malaysia, English and Chinese, told the story of how the three soldiers “heroically” tried to blow up Alor Setar Bridge to thwart defenders but their bomb exploded prematurely.

Mohd Asmirul had earlier clarified that although he cut the ribbon to unveil the monument, it was not done by the state government nor did the government play a role in writing the account of how the soldiers died in 1941.But the damage was already done.

Kedah Chinese Assembly Hall president Datuk Cheng Lai Hock, in a press conference yesterday, said it was an insult to victims of the Japanese Occupation.

“They were our enemies. How can we classify enemies as heroes here?

“It should never have been erected. The state government must rectify the mistake they made,” he said.

“The excuse given by the chairman of the state Tourism Committee is unacceptable.

“This is the importance of a two-way relationship between the two countries. The leaders need to communicate well and tell them what is sensitive for us,” he said.

“Does it commemorate or praise the Japanese army for invading our country and doing violent acts towards the people?” she posted on Facebook on Saturday.

Chew questioned the legitimacy of the monument which she felt would only bring back painful memories to Malaysians.

“Demolishing it immediately is the only action that should be taken,” she wrote.

Former prime minister Datuk Seri Najib Tun Abdul Razak also voiced his disagreement over the setting up of the monument.

The monument had been built to remember Lt Hajime Asai. He rode a motorcycle to the northern end of the bridge to plant a bomb, but it detonated too early.

Of his two comrades, Cpl Kaneko Juga was also killed in the blast while Cpl Nakayama suffered serious injuries in the ensuing gunfire with the Allied Forces.

The Japanese eventually took control of the bridge.

On Feb 15, 1942, General Tomoyuki Yamashita awarded certificates of appreciation to families of the three soldiers for sacrificing their lives. Maradona was "the greatest of them all," says Argentine president