The Environment, Science, Technology and Climate Change Minister added that the cost of the operation as a whole would be more than RM10mil.

"It is RM6.4mil for the cleanup alone. This does not include the movement of the officials and all that," she said during a press conference at the inaugural Malaysian Industrial Development Berhad (MIDF) Green Conference.

Yeo said the Sungai Kim Kim toxic waste dumping was a wake-up call for enforcement and environmental laws to be strengthened.

She revealed that in 2018, the government only issued about RM2.5mil in fines from 159 court cases and issued 2,200 compounds.

She said that the Ministry was working with the Attorney General to make the culprit pay for the clean-up costs.

"The AG's Chambers is still looking at how to make this (happen) due to current limitations of the existing law," she said.

"That is why we need to review the law… I want to make people who can pay (for polluting the environment) to pay for it," she said.

Yeo said while the Environmental Quality Act was already being reviewed, the Sungai Kim Kim incident would speed up the tabling of the law in Parliament.

"We are looking into the law to see if we can get the people who commit the crime to pay for it.

"The Malaysian Bar says the person who pollutes can pay – but if the culprit is a lorry driver, for example, how are you going to force them to pay RM6.4mil?" she said, adding they would just be declared bankrupt.

Yeo said the upcoming law would address this issue and hold irresponsible companies.

"Sungai Kim Kim is a wake-up call for us on how to take care of our environment, and for the government to strengthen enforcement and environmental law, and for the public to report suspicious activities," she said.

No toxic gas detected at 46 sites 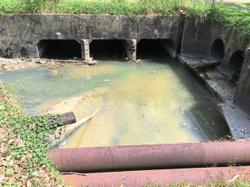