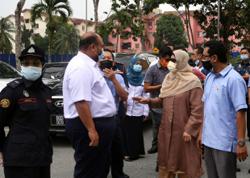 PUTRAJAYA: The government has never allowed the import of plastic trash into the country, said Zuraida Kamaruddin (pic).

The Housing and Local Government Minister said that they only allowed the import of clean plastic scrap that could be recycled into resin.

"We have never approved the import of plastic rubbish but we allow plastic scrap.

"We only import from developed countries such as from Europe, Australia, United States, Japan and Korea," she said during a town hall session on plastic waste on Tuesday (Jan 15) night.

Zuraida said that only 19 out of 114 plastic waste AP (approved permit) holders currently pass requirements to import plastic scrap into the country.
She said that out of the 114 AP holders, out 54 were active.

"They pass the new regulations on paper. I want to go down and see for myself and whether they follow these regulations," she said.

There are now 18 regulations that need to be complied with for AP holders to be allowed to import plastic scrap.

Zuraida said that she had visited several of these factories in Kedah and Penang.

"If all are fine, we will allow them to import plastic waste," she said.

She said the industry was worth RM30bil a year.

"There is potential for it to contribute income to the country, but we need to have tight regulations," she said.

She said that there was the possibility of fraudulent declarations when importers brought in plastic waste.

Things became heated during the session when a few activists repeatedly spoke about their frustration with supposed government inaction.

Those representing the industry defended their work and said that they also wanted illegal factories to be shut down.

Following the uproar, the Housing and Local Government Ministry in July temporarily revoked the APs for plastic waste imports, affecting the 114 legal plastic waste factories all over Malaysia.

The government has also established a joint ministerial committee made up of four ministries to look into the issue.

They are the Housing and Local Government Ministry; Water, Land and Natural Resources Ministry; International Trade and Industry Ministry; and the Energy, Technology, Science, Climate Change and Environment Ministry.

"Give us time. We are a new government and new to the business," Zuraida concluded.