‘Hoping for a new King soon’

KUALA TERENGGANU: Tun Dr Mahathir Mohamad says the govern­ment hopes that the new Yang di-Pertuan Agong will be ­elected as soon as possible.

The Prime Minister said the election had to be expedited because he had to have an audience with the Yang di-Pertuan Agong on certain matters.

“The government accepts the decision of (the Sultan of Kelantan) Sultan Muhammad V to step down. It is in accordance with the Constitution,” he told reporters after opening the Terengganu office of Parti Pribumi Bersatu Malaysia here yesterday.

Istana Negara, in a statement released by Comptroller of the Royal Household Datuk Wan Ahmad Dahlan Ab Aziz, announced the resignation of Sultan Muhammad V who was the 15th Yang di-Pertuan Agong from Dec 13, 2016.

According to Bernama, Dr Mahathir said the Conference of Rulers had rules and procedures pertaining to the succession of the King.

These, he added, were enshrined in the Constitution.

Asked about Sultan Muhammad V’s successor, Dr Mahathir said the government would in no way interfere in the matter. 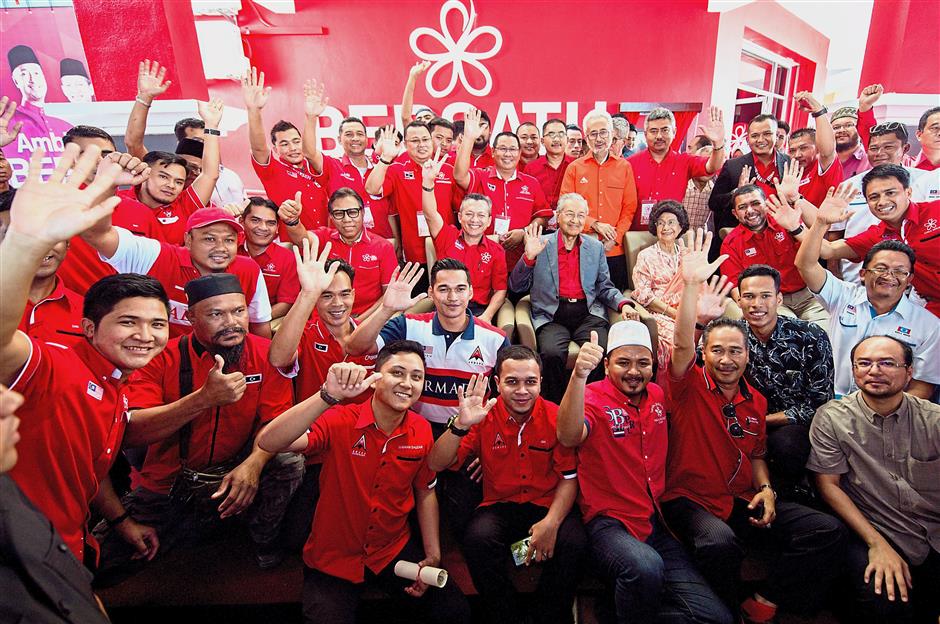 All together in unity: Dr Mahathir and Tun Dr Siti Hasmah posing with Bersatu members to commemorate the launch of the Terengganu Bersatu headquarters in Ladang Tok Pelam in Kuala Terengganu. — Bernama

“The next Yang di-Pertuan Agong will be determined by the Conference of Rulers. I do not know how it is done and, according to their (Malay rulers) tradition, they have their own arrangements,” he said.

On the performance of the current Cabinet ministers, Dr Mahathir said overall, he was satisfied with how they were performing.

“We must remember that they are members of a new Cabinet and had never been ministers before. They had been very vocal when they were in the opposition and now have to adapt to the new situation,” he said.

Dr Mahathir said they should be given a chance to prove themselves and that there was no necessity to replace them with new ministers.

On a separate matter, Dr Mahathir, who is Bersatu chair­man, said he often prioritised problems faced by the Malays because he wanted them to rise up and be progressive like the other races.

“Bersatu will always give priority to the problems faced by the Malays who are still a race that is poor.

“Changes must be made so that the Malays can enjoy the wealth of the country. So that in the end we do not fall very far behind,” he added.

Meanwhile, it is understood that Dr Mahathir would be meeting the Sultan of Johor, Sultan Ibrahim, on Thursday.

New King to be chosen on Jan 24

Rulers to decide on new King