KUALA LUMPUR: Vans equipped with loudspeakers blaring ­reminders to the public on the smoking ban made their rounds in Bandar Sri Permaisuri.

At the same time, Health Minister Datuk Seri Dr Dzulkefly Ahmad, who was walking around checking on premises, was visibly delighted to see no one smoking.

He visited three restaurants here and handed out brochures to patrons along with no-smoking signs to owners.

As he stopped at tables to chat with members of the public, Dr Dzulkefly could be heard explaining the ban and assuring them that the government was not out to punish anyone.

“Do you enjoy the smoke-free air this morning? We are not here to compound anyone. We are focusing more on spreading awareness about the ban,” Dr Dzulkefly was heard saying to a family sitting down for breakfast here yesterday.

Later, he told reporters that the government planned to gazette more establishments as no-smoking areas to make Malaysia a “clean-air nation”.

He said nine types of eateries had been gazetted as no-smoking areas but that the government would be on the lookout to add more places to this list.

“The nine types of establishments currently under the smoking ban include open-air eateries, shoplots, restaurants and also food trucks.

“But day by day we will identify more public places to add to the list such as launderettes, as sometimes there are people smoking there and this can be a hazard to children. Getting the message across: Two workers at a restaurant in Senawang, Negri Sembilan, wearing face masks with the ‘no smoking’ sign printed on them while serving customers. — Bernama

“These are among the things that we plan to do to ensure Malaysia has clean air. It starts with banning smoking in public places,” said Dr Dzulkefly after his walkabout.

While there was no timeline to gazette more places as smoke-free zones, he said the list would be expanded gradually.

“We will update as and when we see the requirement. Today on my walkabout I see that the laundrette is very visible and if we don’t define that, it will escape from our radar,” he said.

Dr Dzulkefly, however, said compounds would be issued at the next stage.

“We want people to understand that the ministry does not want to punish. Instead, we want to educate them so that the smoking ban is effective and can be implemented.”

More than 3,000 premises and restaurant owners had been briefed on the standard operating procedures of the ban during townhall meetings with the ministry, he said.

Dr Dzulkefly said the ministry was also ready to face a smokers’ rights group, which filed for judicial review to challenge the smoking ban on Monday, in court.

“The government stands firm in protecting vulnerable groups such as the elderly and children from cigarette smoke in public places,” he said.

“We are more than willing to see them in court. We have a very firm ground.”

Smokers in Sarawak carry on as usual 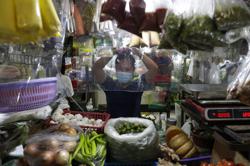