No ‘masalah’ too big for Masala Wheels

PETALING JAYA: A single type of spice is hardly useful alone but when mixed with others and blended correctly, it will lead to a feast of flavours.

That’s how the founders of Masala Wheels, a venture speciali­sing in Indian and Sri Lankan food, view troubled youths who come to their restaurant here.

“Masala is a blend of ground spi­ces but for some people, it is also a play on the word masalah (pro­blem).

“So we see every problem as a colourful spice with hidden potential,” said one of its founders Kuhan Pathy.

Starting as a food truck in 2015, the social enterprise, which is one of the 10 winners of the Star Golden Hearts Award 2018, wanted to help marginalised youths unleash their potential.

Kuhan said these youths were usually leading a life of crime and could fall into a precipice if not helped in time.

Being a food truck allowed Masa­la Wheels to be mobile and search for youths who are involved in unhealthy activities such as substance abuse or being part of street gangs.

“One of those we helped was a wayward youth from Johor whom we found living under a bridge in Puduraya. He survived by mugging people,” he said.

Through their interactions with youths, Kuhan said Masala Wheels discovered their talents and skills.

The food truck business has moved since into a brick-and-mortar restaurant but it remained steadfast in its mission to help marginalised youths.

Desperate parents and guardians who heard of the venture started sending their children there in hopes that Masala Wheels could help them. Kuhan (right) and his partner S. Ravindran with their Star Golden Hearts Award?.

“From the outside, we look like a restaurant but we are a halfway home,” Kuhan said.

He said Masala Wheels had helped about 50 youths turn their lives around in the past three years.

Sometimes, though, there are risks to their good intention.

A youth wanted to stab Kuhan in the head after being reprimanded for being unhelpful.

It all started when Masala Wheels discovered that one of its serving plates was leaking during a catering job.

“While looking through the CCTV footage, we saw a boy stabbing the serving dish. When we confronted him, he said the knife was meant for me because I had scolded him earlier and he did not like it,” Kuhan said.

The boy’s grandmother had sought the organisation’s help last year when she was not able to control him. 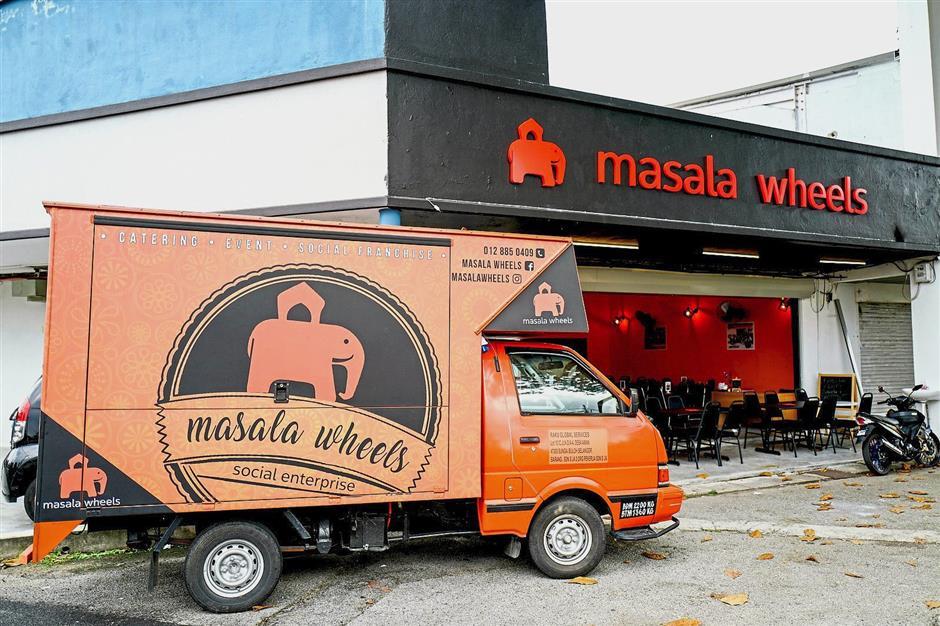 Doing good: Masala Wheels started out as a food truck business that not only sold food but set out to help wayward youths.

He had left school when he was 13 and although he had attitude problems, Kuhan also noticed that the boy, now aged 17, was good at greeting customers and other tasks.

“One of our patrons suggested that he go for a psychology evaluation. That was when we found that he has attention deficit and hyperactivity disorder,” he said.

Kuhan decided to help the youth and give him tasks he was good at.

He also encouraged him to channel his pent-up energy in a positive way.

The boy has since gained employment in one of the top restaurants in Kuala Lumpur, earning an income to support himself and his grandmother.

“He comes back often to visit us because he regards us as his big brothers,” Kuhan said.

It also hopes to match skilled youths with the right F&B jobs.

“We hope our efforts will encourage more people to support organisations that hire people from marginalised communities,” he said.