By JO TIMBUONG and FATIMAH ZAINAL

Star Media Group chairman Datuk Fu Ah Kiow said people and organisations that help bring positive changes to society were a ray of inspiration to others, especially during challenging times.

In light of recent negative incidents, Fu said the media had a role to play in promoting goodwill and kindness.

He said it was important to shine a light on the good work of others, especially when the world was often bombarded with negative and sad news.

“Stories about organisations and good Samaritans working to make a change for the better are the silver linings that inspired The Star to introduce this award four years ago.

“Through this effort, we would like to emphasise that we must sow the seeds of goodwill and harmony,” he said after the award presentation ceremony to the 10 winners of Star Golden Hearts Award 2018 at Menara Star yesterday.

The award gives a special emphasis to organisations or individuals, who cut across all groups regardless of race, religion and background.

Fu said despite government efforts to address the issues faced by the underprivileged, corporate bodies must also do their part in delivering aid to the needy.

“There are still pockets of people who really need assistance.

“We at Star Media Group are trying our best to help and this award is part of what we can do,” he said while lauding many privately-­run social welfare organisations that look after the elderly, orphans and the disabled. 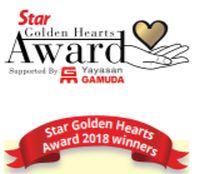 Fu added that there was a need to cherish the very fabric of unity that the nation was built upon in every possible way.

He said, for this reason, individuals and organisations that promote unity in diversity in their work and as a way of life in the country must be celebrated.

“We hope this will encourage more organisations to continue with the good work.

“On our part, Star Media Group will continue to highlight their stories to encourage more people to do good,” he said.

Star Golden Hearts Award, supported by Yayasan Gamuda, is among some of the key initiatives by Star Foundation, the group’s charitable arm.

Other programmes include the Sterling Service award, which recognises excellence in public service, rewarding not just the organisation but the people on the ground and the Medical Fund programme, which raises funds for the underprivileged in need of medical care.

In addition, there is also a wheelchair programme which donates wheelchairs to the underprivileged community and provides regular funding support for NGOs and social-focused organisations.