Najib, 64, pleaded not guilty to four charges of graft that allegedly occurred at the AmIslamic Bank Bhd branch in Jalan Raja Chulan here while in his position as a civil servant, namely as prime minister, finance minister and chairman of the 1MDB advisory board.

The first charge said the bribe was an inducement for Najib to get the Cabinet’s agreement for the Malaysian government to give a sovereign guarantee to the Terengganu Investment Authority Bhd (TIA), thus allowing the company to receive a loan of up to RM5bil from the domestic and international markets via an Islamic Medium Term Notes Programme.

It stated that he also used his position as prime minister in 2009 to have the federal government take over TIA and subsequently rename it 1MDB, where he had a direct interest in the company. 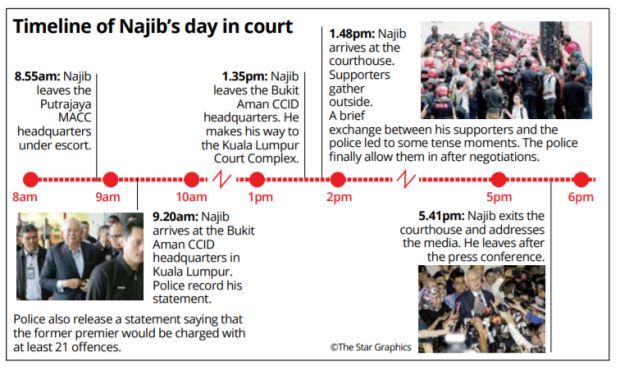 According to the first nine charges, he had between March 22 and April 10, 2013 received a total of RM2.08bil in monies from illegal activities transferred into his account from Tanore Finance Corporation through the Falcon Private Bank in Singapore.

Five charges stated that he transferred back out the monies from illegal activities – amounting to RM2.03bil – to an account belonging to Tanore Finance Corporation.

Two charges stated that Najib transferred monies from illegal activities – amounting to RM162mil – to another AmIslamic Bank account in his name.

The other charges stated that he used the money to make payments to various parties, including RM20mil to Umno, RM100,000 to Umno Batu Kawan, RM246,000 to an individual named Lim Soon Peng, RM2mil to ORB Solutions Sdn Bhd and RM303,000 to Semarak Consortium Satu Sdn Bhd. 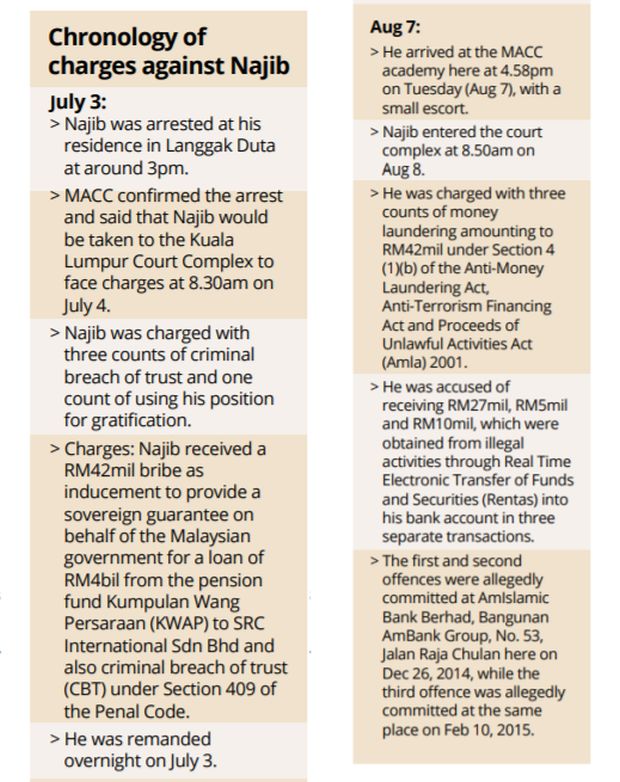