PETALING JAYA: News of the deadly alcohol poisoning has prompted the Malaysia Liquor Manufacturer and Bottler Asso­ciation to advise tipplers to avoid “at all cost” alcoholic drinks that are sold way below market price.

This would include products that were supposedly sold “duty-free” in retail shops or from unlicensed operators, it said.

The association, made up of about 30 licensed local alcohol bottlers and producers, said it had often tried to educate the public about buying original drinks and constantly improve packaging to circumvent problems arising from fake products.

The deaths confirmed an “ongoing concern”, it said, adding the association had been pursuing the issue of “a growing black market” in Malaysia for years.

“We have been aggressively highlighting such concerns to relevant government departments to step up enforcement, fearing such tragedies would occur and now it has.

“We suspect the products involved are fakes and most likely smuggled into Malaysia under the guise of parallel imports of the original product.

“These are not Malaysian products nor are they bottled by licensed local bottlers.

“The difficulty in identifying elusive black market operators have some officials quickly pointing to legal local bottlers as scapegoats,” the association said in a statement.

This comes in the wake of a Health Ministry revelation that 21 men died of suspected poisoning after buying alcohol beverages from different shops in the Klang Valley since Monday. 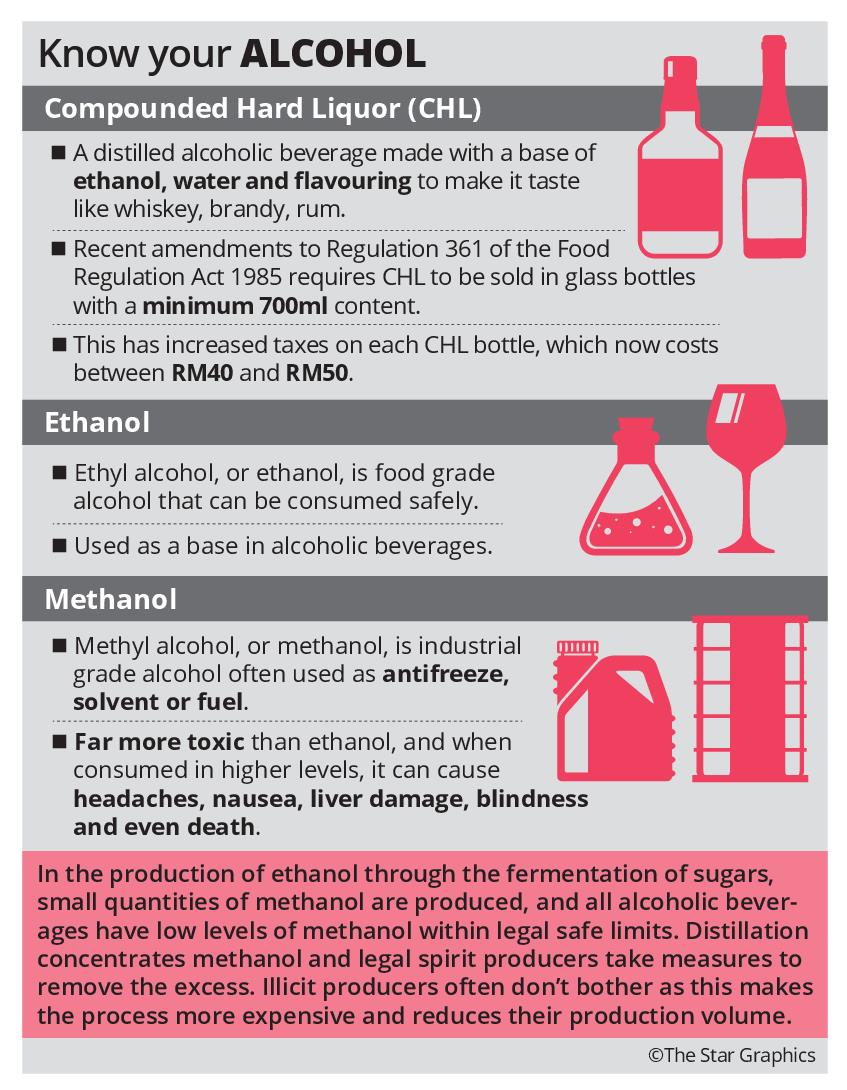 The association said it had, for several years, cautioned that the black market for alcoholic products was thriving on Malaysia’s high tax rates.

“In October 2016, despite our strong objections and concerns, the previous administration at the Finance Ministry increased taxes on various local alcohol products between 150% and 560%.

“Insufficient enforcement coupled with high tax rates sealed the fate for such tragedies to occur,” it said.

It also noted that border smuggling and import of counterfeit liquor products had exacerbated since the 2016 tax increase.

“In Malaysia, demand for affordable liquor is high and any tax increase boosts the incentive for such activities as the alcohol trade becomes more lucrative.

“These illicit operators do not pay any form of tax and hence stand to make about 200% to 300% in profit,” it said.

With strong demand for affordable alcoholic products, weak enforcement and high tax rates, the association warned that Malaysia was fast becoming a hotbed for smuggling and illicit activities.

It said that many of the association members had evolved from producing traditional alcoholic products such as tuak/tapai, rice wine and medicated samsu to include international products such as blended whiskey, vodka and wine.

“Often misrepresented as ‘cheap compounded hard liquor’, the margins of our products are purposefully kept slim in order to provide a safe and regulated alternative to more expensive imports, meeting consumers’ demand for affordable options,” it said.

Unfortunately, the association noted that deaths from alcohol poisoning from consuming illicit products were not unusual with similar incidences occurring in Indonesia and Thailand where demand for affordable products was high from low income groups.