THE cancellation of two multi-billion dollar projects in Malaysia awarded to companies from China ends months of uncertainty, besides marking new parameters for investment by companies from the world’s second largest economy.

Tun Dr Mahathir Mohamad announced the cancellation of the RM55bil East Coast Rail Link (ECRL) and two gas pipeline projects worth RM9.41bil at the end of his five-day visit to China.

The Prime Minister said the projects only added to Malaysia’s debts and had to be cancelled until the country could afford it.

He said China’s leaders understood Malaysia’s plight and their response was positive.

He said he explained to President Xi Jinping, Premier Li Keqiang and chairman of the National People’s Congress Li Zhanshu why Malaysia could not go on with the projects.

“It is all about borrowing too much money, we cannot afford it, we cannot repay and also because we do not need them.

“The Chinese see our point of view and none of the three leaders said ‘no’.

“They understand why we have to reduce our debts,” Dr Mahathir told Malaysian journalists here yesterday before wrapping up his official visit. 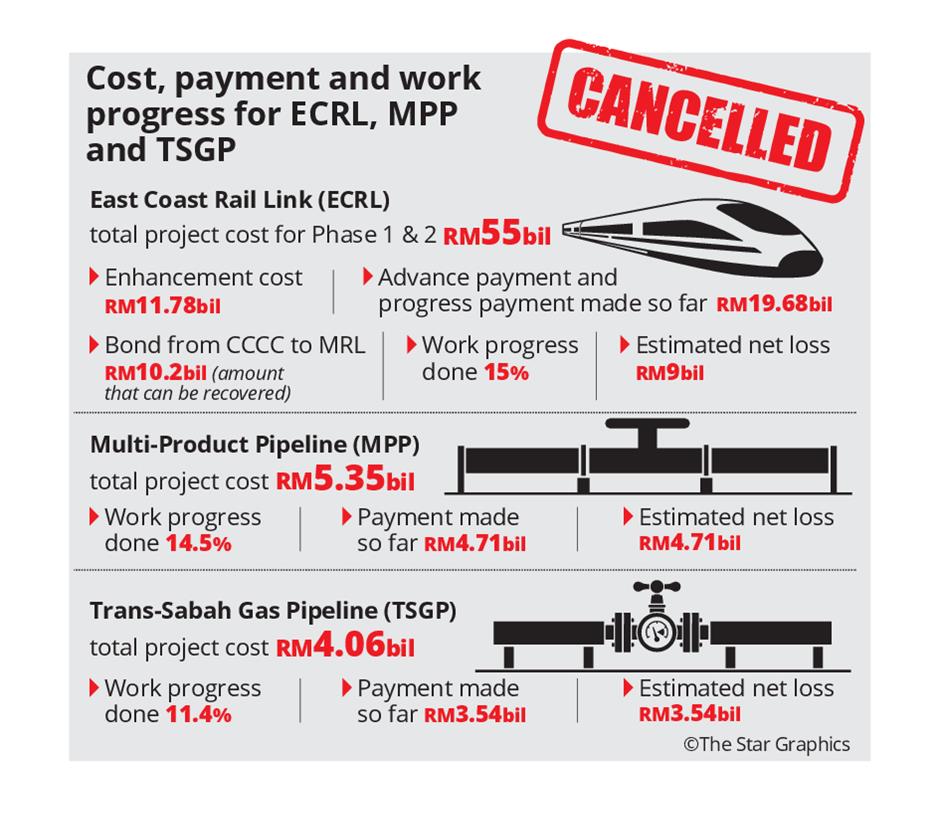 Asked about compensation, he said details including the amount would have to be negotiated and worked out by officials later.

“If we have to pay compensation, we have to pay. We cannot afford it, so we must find a way to exit it at the lowest cost possible,” he added, blaming the previous government for entering into such unfair agreements with huge exit costs.

Both projects were awarded under the previous government in November 2016 during an official visit to China by former prime minister Datuk Seri Najib Tun Razak. Since Pakatan Harapan took over, China’s investments in Malaysia and large-scale infrastructure projects have come under intense scrutiny.

Both the railway and gas pipeline projects were mired in controversy with huge advance payments made not corresponding with ground work.

Dr Mahathir also laid out the types of investments that Malaysia wanted to attract, citing foreign direct investments (FDIs) which brought in capital and technology, and hiring of locals to produce goods for local consumption or export.

“This is the meaning of FDI, not buying land and setting up new cities. We want our people to be employed and they (China) agreed,” he added.

Criticism on previous construction projects undertaken by companies from China was that it had little multiplier effects on domestic economy because almost everything was brought in from there.

As per the ECRL project, most of the railway track work was slated to be handled by companies from China despite Malaysia having many companies with such expertise. And as for the two pipeline projects, an average of only 13% of the work was done but the amount drawn down was a staggering 88% of the total cost of RM9.4bil.

No local company was known to be undertaking the gas pipeline jobs.

Dr Mahathir in the past also criticised land and reclamation rights being sold to property developers from China to build large-scale property projects, especially in Johor.

Asked what happened to the money that had been drawn down, he said it should be recovered from Najib.

“He was the one who entered (into the agreement), I have never heard of a contract in which you pay on time without any condition that the work must be done,” he added.

Economists said investors had been waiting for some kind of direction on China’s investments here with Pakatan in power.

Socio Economic Research Centre executive director Lee Heng Guie said the impact of the cancellation of the projects to the Malaysian economy would be manageable, although there would be some negative effect on consumption and investment.

“There could be some impact on the job market with the expected layoffs.

“But I don’t think the cancellation will pull down investment and consumption significantly.

“Whatever contraction of the economy that we will likely see because of the ECRL cancellation should be cushioned by ongoing projects,” Lee added.

Cancellation of ECRL comes as a shock to workers