GST vs SST. Which is better?

MALAYSIA’s decision to revert to the Sales and Service Tax (SST) from the Goods and Services Tax (GST) will result in a higher disposable income due to relatively lower prices it will incur in most goods and services.

Consumers will have a choice in their consumption – by paying service taxes based on their affordability and ability.

The coverage of GST was comprehensive and it covered too wide a sector. While it was able collect a sustainable sum of RM44bil for the country, it was not people-friendly.

The narrowing scope of the SST will at most, collect approximately RM23bil for the country but it will indeed relieve the people – so SST is needed by the people.

The Sales Tax Bill and the Service Tax Bill have just been passed at the Dewan Rakyat and are expected to get approval from the Dewan Negara when it convenes on August 20.

This leaves little room for businesses and entrepreneurs to get ready for the new tax regime in less than a month’s time. 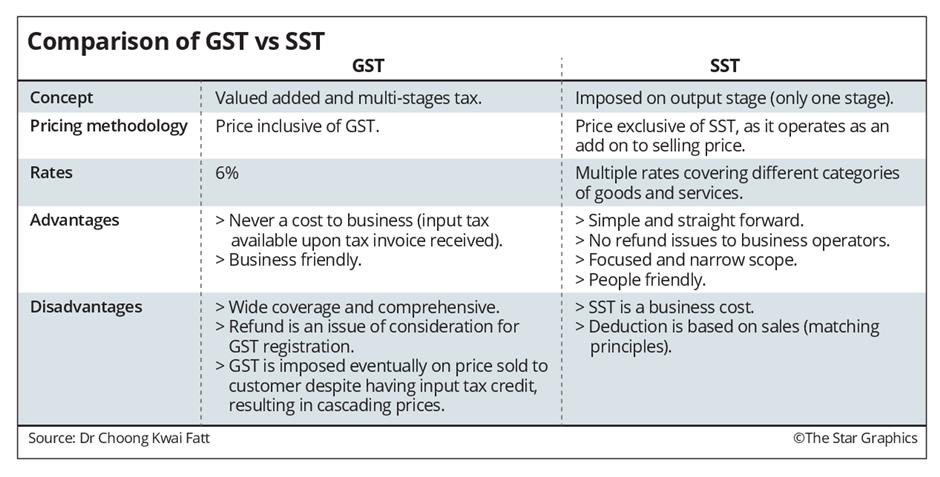 Therefore, it is of utmost importance to understand the concept and mechanism of SST as stated in both the Bills.

SST comprises two legislations. The sales tax is imposed on the manufacturing sector as governed by the Sales Tax Act 2018 while service tax is imposed on selected service sectors, with one of the most notable ones being the food and beverage (F&B) service providers.

The Service Tax Act 2018 would govern the selected service providers and the details would be gazetted in the subsidiary legislation, PU(A) Service Tax Regulations 2018.

Finance Minister Lim Guan Eng has announced that the threshold for F&B providers is set at annual turnover of RM1mil.

This would mean that those who operate with less than RM1mil turnover would not charge service tax at 6%.

This translates into hawker food, cafes, take aways or food trucks being able to provide F&B at lower prices as compared to the GST regime of 6%. Consumers are deemed to be given an option to pay service tax or not, depending on their consumptions at places such as fast food outlets, restaurants or food courts.

Generally, living costs will be relatively lower in the SST era as the B40 group of consumers would certainly be relieved in their daily eating affair.

The existing GST regime sets up the threshold at RM500,000 per year, meaning that almost all restaurants, including simple mixed rice outlets, would have a GST of 6% imposed. The service tax regime would not impose service tax of 6% on service charge rendered in any restaurant or café operator.

Service charge in its true essence, represents tips or gratuity to the waiters working in the restaurant and it is entirely at the discretion of the F&B operators.

These operators may choose to charge from 5% to 15% or even free of charge. In summary, in the event service charge is imposed, it would not be subject to service tax.

SST is people friendly as the daily consumption of food and beverages would be much lower in price as compared to the GST regime. The imposition of service charge is not governed by any law and it is entirely at the discretion of the F&B operators.

In order to avoid disputes, it is advised that notice be placed outside the premises if the F&B operator is imposing a service charge ans the rate determined by them.

SST is one stage

Business entrepreneurs must be mindful and careful in the cost management as Sales Tax – although imposed at 10% – would eventually result in a much lower pricing of goods as compared to the GST regime.

GST is operating on a value added concept with input tax available as deduction. The supply chain moving from manufacturers to distributors, dealers and to consumers would result in higher pricing as GST is imposed on final stage, comprising of value add and profit margin.

SST is a business cost

Under the GST regime, input tax is available as a credit or deduction against output tax based on tax invoice received from GST registrant suppliers.

This would mean that GST is never a business cost as deduction is available against output tax even though there is no sales generated. Sales Tax on the other hand, would be paid by the trading company purchasing goods from the manufacturing company.

It is a business cost and deduction is only available when there is a sale. This would mean that business cost would be higher as Sales Tax is part of the inventory cost and to be deducted as cost of sales when goods are sold or exported. In simple terms, no sales, no deductions.

Businessmen are urged to carefully analyse the cost and not overprice the goods for the benefits of the people and the sustainability of their businesses. The reduction of GST from 6% to nil would immediately translate a price reduction of 6%, which is a must for a businesses to adhere to.

Failure to adhere to the pricing would expose the operators to the fines and penalties on anti-profiteering governed by Price Control and Anti-Profiteering Act 2011.

As the breakdown shows, SST is well suited in the Malaysian environment, to both the business communities and the people.