PUTRAJAYA: Riza Aziz will have a “date” with graft investigators again today, despite having to spend nine hours with them during the first round of questioning yesterday.

Sources said there are still some things that they need to ask Riza on 1MDB.

There were allegations that funds from 1MDB were used to finance several Hollywood films.

The 48-year-old, clad in a dark suit and yellow shirt, arrived at the MACC headquarters at 1.30pm, accompanied by his lawyer Datuk K. Kumaraendran.

When he was being questioned, MACC officers brought Najib in.

Riza is a co-founder of Hollywood film production company, Red Granite Pictures, which among others, produced the famed The Wolf of Wall Street. He is one of Datin Seri Rosmah Mansor’s two children from a previous marriage. 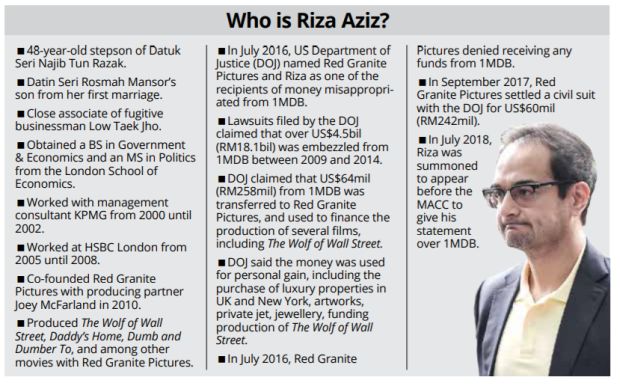 Meanwhile, with allegations of graft hanging over their heads, two prominent politicians were summoned to give their side of the story.

When met by reporters, Dr Ahmad Zahid said he had repaid all the money belonging to a foundation that was used to pay off his credit card bills and that of his wife.

He said the payment was made in 2016, after he found out that his officer had mistakenly used a cheque belonging to the foundation.

“I received the credit card bills and passed them to my officer to make payment. But he made a mistake by using money from the foundation.

“When I realised this, I repaid the amount in full with my own,” he said, adding all the necessary documents, as well as a photocopy of the cheque for the repayment, were given to MACC officers.

Dr Ahmad Zahid said the foundation – Yayasan Akalbudi – was set up by him and managed by his family.

He also claimed to be the “biggest contributor” to its fund.

Separately, Shahrir said the RM1mil he received was to finance his political activities.

He had sought financial aid from former premier Datuk Seri Najib Tun Razak, who was then the Umno president.

“There is no law to state that it is wrong to accept political funding. I had approached Najib in my capacity as Johor Baru Umno chief,” he told reporters after spending more than six hours with MACC officers.

Shahrir said he told them that he received the cheque in November 2013.

“It is to finance political activities in my constituency, as well as to carry out my duties as MP,” he said.