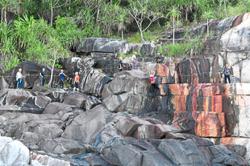 Fruitful endeavour: Lim pricing her durians in airtight containers for only RM10 each in Macalister Road, George Town.

GEORGE TOWN: An extended season and booming yield of the Malaysian King of Fruits has caused durians to be sold cheaply now.

The fasting month in May had resulted in a drop in durian sales that contributed to the increase in supply, which eventually caused prices to come down.

A durian stall along Macalister Road here was seen selling the fruit packed in airtight containers for RM10 each only.

The stall, called Durian Balik Pulau, is selling more than 10 types of durian besides jackfruit, rambutan, mangosteen and mango.

Its owner Lim Beng Choo said they have been selling the fruit for RM10 since May as sales declined during the fasting month.

“Now, there is abundant supply, so we have retained the price.

“The price is likely to drop a bit more since supply is increasing and many traders are also selling it,” she said at her stall yesterday.

Lim said the durian season is expected to last until September this year.

She added that they also enjoy a good supply as they have their own orchard in Balik Pulau, the state’s famed durian-producing region.

The durians that are being sold in the containers are mostly of the D11, D604, Xiao Hong, Ang Bak Kia and Hor-Lor types.

She is also selling the famous varieties such as Musang King, Black Thorn, Lipan and Ang Heh (Red Prawn). 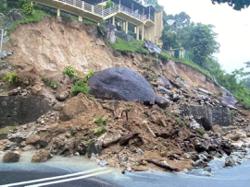