Theseira (left) and Lazaroo at the "Festa San Pedro" in Melaka on Friday.

MELAKA: The Portuguese community got their first woman village head in an otherwise male-dominated leadership of the settlement at Ujong Pasir here.

Jacinta Lazaroo, 55, was recently minted as the head of the Portuguese Settlement's Village Security and Welfare Committee (JKKK) after her appointment was consented by Melaka Housing, Local Government and Environment committee chairman Tey Kok Kiew.

Save the Portuguese Community (SPCAC) action committee chairman Martin Theseira, who was instrumental in the appointment of Lazaroo, said he had moved the motion to have the first female village chief to Tey since he took office last month.

"We are glad that Lazaroo became the first lady of Portuguese of the community and the settlement elders are now coaching her," he told The Star during the launching of the "Festa San Pedro" at the Portuguese settlement here on Friday (June 29).

The Festa San Pedro is a celebration to commemorate the Feast of St Peter, the patron saint of fishermen.

Theseira said Lazaroo will also get the close co-operation from former "Regedor" (headman) Peter Gomez to teach her the ropes in managing the JKKK.

Theseira said SPCAC is working towards reinstating the post of Regedor that was introduced during the British rule in 1926.

The position of Regedor was repealed a few years ago after the debut of JKKK.

Theseira said Lazaroo would emerge as the first female Regedor in the history of the settlement if the state government agrees to re-establish the post.

Earlier, Melaka Tourism, Heritage and Culture committee chairman Muhammad Jailani Khamis who made an appearance at the festival, pledged to allocate funds to the settlement to turn "Festa San Pedro" into a grand event from 2019.

He said the settlement leaders should submit the working paper of the festival to the Tourism and Culture Ministry and it would be endorsed by the state government. 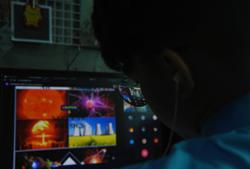