The pride of Malaysia

The Prime Ministers office in Putrajaya was built to depict strength, stability and symmetry.

Malaysia’s federal administrative capital, Putrajaya, is arguably one of the prettiest in the world.

Led by the theme “Garden City, Intelligent City”, the world-class city was built to be the most desirable address in the country, showcasing sophisticated government buildings, office towers, commercial complexes and modern homes nestled amidst beautiful gardens, parks and lake.

As a development set out to be a benchmark for others, its developer Putrajaya Holdings Sdn Bhd (PJH) worked tirelessly to transform what was on pen and paper to brick and mortar.

Established in 1995, PJH had one main mission – to design, implement and develop the comprehensive, highly strategic 20-year Putrajaya Masterplan.

When Tun Dr Mahathir, the then fourth Prime Minister, sought to create a federal government administrative city, the aim was to relieve Kuala Lumpur of some of the problems caused by rapid urban development.

Taman Botanical is one of the many green areas found abundantly in Putrajaya.

PJH chief executive officer and director Datuk Azlan Abdul Karim said Putrajaya has since gained the reputation of a deluxe city, where homes and offices were designed with comfort, convenience and quality in mind.

“When it came to planning, we knew that we wanted to give Malaysians an aesthetic city that they could be proud of, but more importantly, a self-sustaining cosmopolitan hub offering a high quality of life to its residents,” he said. An aerial view of Parcel F.

To realise this vision, the space was meticulously and systematically planned and accounted for by engineers, architects, landscape designers and other specialists, resulting in the quality development we see today.

“Some of the pride of the city include the magnificent Putra Mosque on Putrajaya Lake, Seri Wawasan Bridge, Dataran Putra, the Boulevard, Putrajaya Wetlands, Ministry of Finance Complex, Perdana Putra and Seri Perdana,” he said.

Also known as the Prime Minister’s office, Perdana Putra is hard to miss as it sits grandly on a 50m hill.

This focal point of the Federal Government Administrative Capital of Putrajaya was built to depict strength, stability and symmetry – regarded as core values of a good government.

The soaring granite structure is firmly planted on a stable two-hectare perimeter base in the middle of the mound, representing the importance of a strong foundation for the efficient administration of the country.

The brown and green hues of the six-storey building depict harmony and diversity, and complement the natural environment. 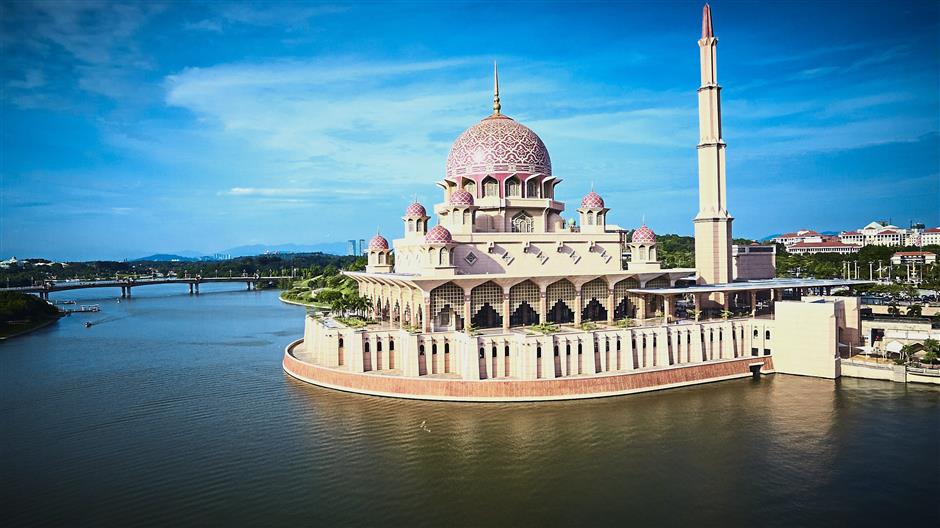 Putra Mosque is famed for its desert-pink colour and exquisite dome.

Famous for its desert-pink colour and exquisite dome, Putra Mosque shimmers under the sun, thanks to the intricate tilework on the main dome, made of reinforced fibreglass and inlaid with pink and beige glass mosaic tiles.

The evolution of mosque design in Malaysia with its Islamic-inspired architecture, traditional designs and craftsmanship is clearly reflected. Resting on Putrajaya Lake, this magnificent building can accommodate an astounding 10,000 worshippers in its gargantuan hall.

Putrajaya Lake, the city’s crown jewel, is where people gather for sports and recreational activities.

Putrajaya Wetlands is the water filteration of Putrajaya Lake, which is kept clean and healthy for recreational activities. Its effectiveness as the “kidney” of the lake is determined by Putrajaya Lake Water Quality Standard.

The water quality of the lake is monitored using the Environment Management System (EMS) to ensure that it is maintained at DOE Class II standard, safe enough for body contact recreation such as water-sports activities.

The 400ha man-made lake was built by shaping, deepening and flooding the valleys of Sungai Chua and its main tributaries.

One of the unique features of Putrajaya Lake’s permanent dam is the design of the labyrinth spillway, the first of its kind in Malaysia. 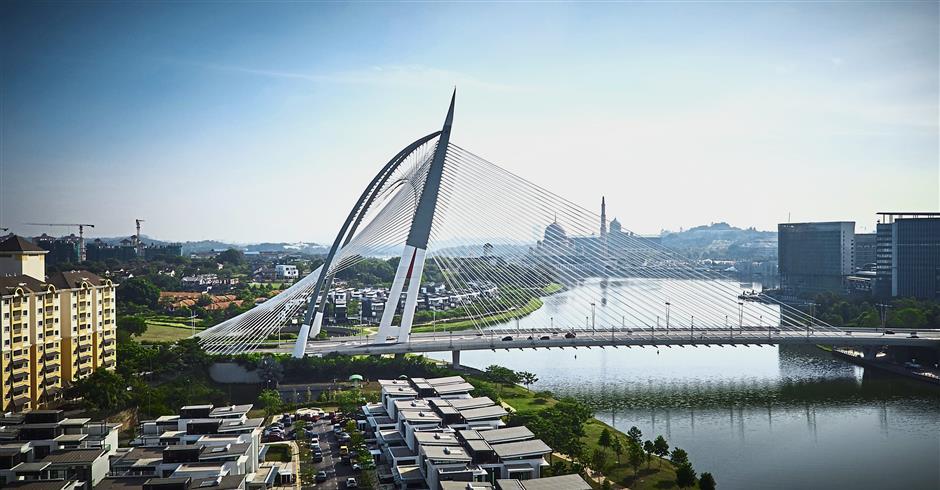 The Sri Wawasan Bridge holds the record for the single largest concrete pour in the development of Putrajaya.

As its name suggests, Seri Wawasan (vision) is a bridge that reflects a bold vision.

This futuristic single span cable stay bridge sweeps across the Putrajaya skyline like a sailboat in full flight.

Spanning 240m across the lake, the bridge is an outstanding Malaysian achievement in bridge design and construction engineering, and was completed within 34 months.

It holds the record for the single largest concrete pour in the development of Putrajaya with a total of 3,664m³ of concrete poured continuously to cast the 21m x 36m main pylon of the bridge.

For its residential component, Azlan highlighted one of the unique selling points of Putrajaya Homes, the company’s residential development arm, was the “no-fence” policy.

“Since the 1960s, homes were grilled, gated and walled out of the need to secure homes from theft and robbery. These barricades tend to isolate families from each other.

“The ‘no fence’ policy strives to revive the sense of community that had existed in the good old kampung (village) days before Malaysia succumbed to rampant urbanisation in the post-independence years.

“It is the foundation to restoring the values of sharing, caring and trust in a friendly, safe and secure living environment,” he explained. 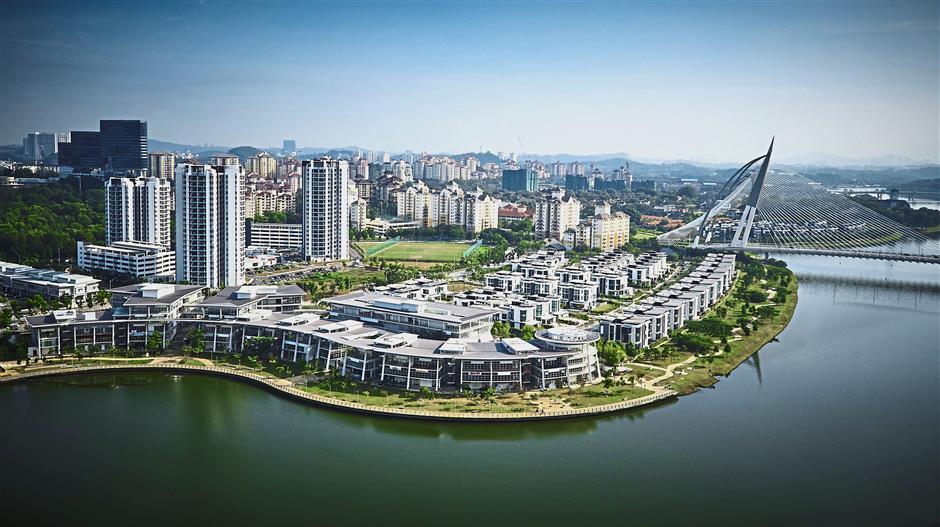 The residential areas in Putrajaya adopt a nofence policy to instil a sense of community. Seen here is Ayer8 and New Haven (below).

Residents who feel that fencing is necessary can do so, if they follow the strict fencing guidelines, but notably, crime rate in the area is one of the lowest in the country.

There are residential units in 14 of the city’s 20 Precincts with a total of 77,000 units, 52% to be occupied by govern­ment staff while the remaining 48% are to be sold to private buyers.

Currently, more than 32,000 units comprising bungalows, semi-detached, terrace apartment, townhouse and affordable homes have been completed and handed over to its residents.

To reflect the city’s theme, Putrajaya has an extensive tract of greenery along the streets, gardens and parks as well as wetlands to enhance the exclusivity of the neighbourhood.

“Throughout the development of the city and with 90% completion of government buildings, PJH has established itself as a reputable developer that has delivered its commitment to the government.

“We are now focusing on commercial development to add more vibrancy to the city and aggressively expanding our land bank beyond Putrajaya to bring more to Malaysians,” Azlan said.

PJH is expecting to complete Parcel F, a government office deve­lopment, by the end of this year.

Parcel F was the first project in Putrajaya to use Building Information Modelling (BIM) in 2012, from design right up to Facilities Management (FM) stage, at a time when the technology was still new in Malaysia, although it has long been employed in the United States.

“We embarked on BIM for our current and final government development project, Parcel F, and everything from design, construction and maintenance is being modelled using this system which will enable us to view the progress in 3D format.

“We will be able to maintain this building using this model for the next 25 years. This is relatively new in Malaysia and this effort has been recognised in Boston, United States recently,” he concluded.

It is anticipated Parcel F shall be fully BIM-FM operated by the first quarter of 2019.