The controversial political figure was under police remand at the Ampang Puteri Specialist Hospital's premium ward after he was charged there with three offences on Friday.

"However, before the bail was processed, he went missing," SAC Fadzil said when contacted.

A source said that Jamal was discovered missing by Shah Alam Court assistant registrar Rahasbiah Abd Rahman around 5.30pm, just as she was about to grant him bail.

Police have launched a manhunt called Ops Tutup to find him.

Jamal, 48, was charged with committing public nuisance by breaking bottles containing alcoholic drinks with a hammer and causing disaster, danger and public nuisance in front of an exit gate of the Selangor State Secretariat building at 10.15am on Oct 5.

He was accused under Section 290 of the Penal Code, which carries a fine of up to RM400 if convicted. He claimed trial.

The magistrate then set bail at RM3,000 pending mention on June 8 at the Shah Alam magistrate's court. 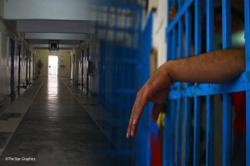