IT was almost midnight on a recent Sunday, and the ETS (Electric Train Service) heading north from KL Sentral was packed with youngsters.

Around two hours later, however, the train was almost empty.

Lai Jen Hong, 24, who was taking the train to Ipoh where he lives, says the group, mostly comprising students from Uni­versiti Tunku Abdul Rahman in Kampar, got down at the Kampar Station.

They had probably gone back to their hometown for the weekend and were returning to campus, he says.

Lai himself was returning from a day trip to Subang Jaya, where he had attended a sales training session from 8.30am to 6pm. “The travel time is around two hours and 20 minutes for a one-way trip,” he says, adding that the total ETS fare was RM60, which is economical.

“In Kuala Lumpur, I move around using the LRT and MRT,” adds Lai, a diploma graduate who now works as a salesman.

“We usually meet at KL Sentral or other LRT or MRT stations. It is very convenient for us,” he shares.

Yes, connectivity has changed the way people live, work and play – for the better – these days.

As Transport Minister Datuk Seri Liow Tiong Lai points out: “The development in our country is a shared vision between the people and the Government. We are on the right track to move towards better days.”

He notes that the next 10 years will be a golden period for the people – the momentum for development is picking up and translating into more and better work and business opportunities.

“We are seeing big developments in the country’s transportation system: rail, sea and air,” he says of the progress in his ministry over the last four years.

Good connectivity certainly makes a huge difference in doing business, as well as the general way of life.

In Tanjung Malim, its MP Datuk Seri Ong Ka Chuan pointed out recently that 120,000 people in his constituency commute by train to work in Kuala Lumpur, about 70km apart, daily.

KL Sentral, he adds, will eventually become a transportation hub for passengers only. 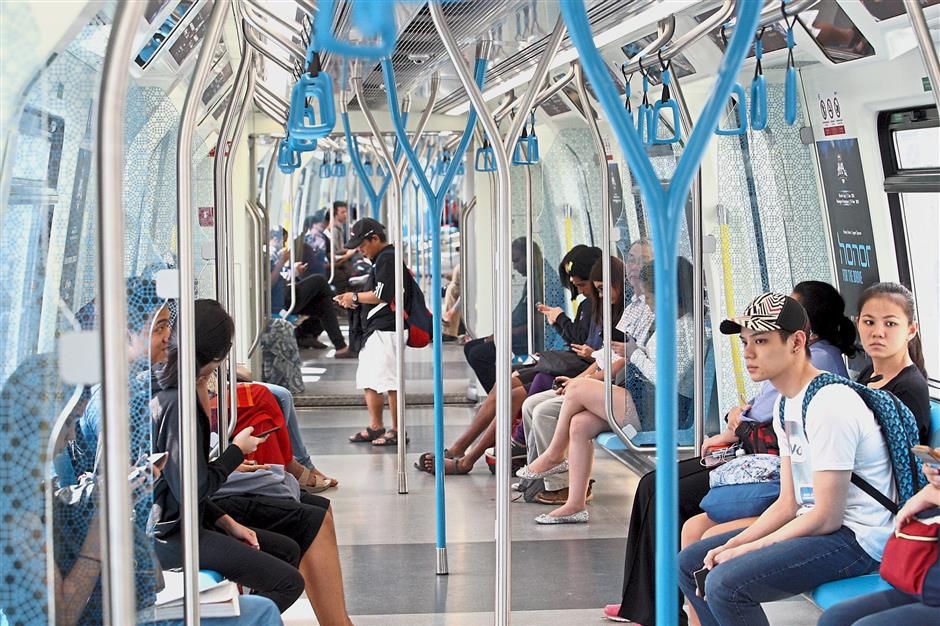 Seamless travel: These MRT passengers will get more connectivity with the expansion of different train services currently in the works.

Liow envisions how an integrated rail network will make Greater Kuala Lumpur or Metropolitan Kuala Lumpur – the nucleus for development – highly accessible to the people.

Another rail to watch is the RM55bil East Coast Rail Link (ECRL), which is due for completion in 2024.

The 688km track from Port Klang in Selangor to Tumpat in Kelantan is set to dramatically transform the areas covering parts of Pahang and Trengganu.

“We can expect many locals and tourists to use the ECRL and make a stop in Bentong,” said the 25-year-old marketing graduate from Utar, who presently works as a supervisor at a durian ice cream shop in Bentong town.

He is confident that Bentong, which is famous for ecotourism and agrotourism, as well as its cuisine and fruits, especially durians, will see business rise further with the ECRL.

Tourism, a billion ringgit business, is fast transforming rural areas and small towns, thanks to rising interest among locals and tourists to explore these areas.

See says that Uber, which has yet to catch on in Bentong, will see good business with the ECRL since the train passengers will need public transportation to move around.

The travel time between the two ECRL stations in Gombak in Kuala Lumpur and Bentong will only take 25 minutes.

Currently, tourists usually come by cars or tour buses to Bentong town, which is often packed during weekends and public holidays.

At the Bentong wet market, vendors also share See’s hope and confidence in the ECRL to spur the economy further.

“Bagus la (good),” she says when asked about her business these days.

Several other vendors selling local produce such as Bentong ginger and processed ginger products like ginger powder and titbits, soy sauce and the Chinese snack sat kei mah are all smiles when asked about how the ECRL would impact their business.

“Many outsiders like to buy ginger powder as a souvenir. It is a practical gift,” she shares.

Liow, who has been Bentong MP since 1999, says more young people in his constituency will find new business and job opportunites when the ECRL starts operating.

He adds that the new rail links in other states such as Johor, as well as links to Singapore, are also shaping up.

Another upcoming line is the Rapid Transit System (RTS) rail track linking Johor Baru and Woodlands in Singapore in 2024, which will ease congestion, especially along the Causeway.

During the two-hour media interview in Putrajaya last Monday, Liow also spoke at length on the development of ports and air travel, the newly opened Digital Free Trade Zone (DFTZ) in the country and the cooperation between Malaysia and China under the Belt and Road initiative.

“The passenger volume is set to increase further with many developments coming up.

On the DFTZ and the increasingly challenging e-commerce sector, Liow says DFTZ will give Malaysia a competitive edge and that the country is expected to see a huge surge in export volume.

On the Belt and Road Initiative, he says it is a shared economic development among the countries involved.

Liow, who is also MCA president, says MCA was the first political party abroad to respond to the initiative by the Chinese government.

Launched in 2013, the initiative covers 65 countries.

With the rapid developments within the country, Liow says Malaysia is on track for international success and has the competitive edge in the world arena.

“We are fast gaining momentum and we need the continuity to move foward,” he adds.