PETALING JAYA: Education Minister Datuk Seri Mahdzir Khalid has refuted a news report that he warned teachers who support the Opposition in the coming general election to quit the profession.

He said the news report was illogical and probably misinterpreted by the said reporter.

“Voting is secret, so how can I warn anyone who wants to vote for the Opposition?” he said when contacted.

He was asked to comment on the newspaper report, which was picked up by news portals, claiming that he has asked teachers and Education Ministry officials who hold office in Opposition parties to quit their jobs.

Mahdzir, however, clarified that he had told a gathering of teachers at Putrajaya last week that civil servants, especially headmasters, should be mindful of their positions.

“I only reminded them of their positions and that they must ‘fine tune’ and put a ‘buffer zone’ between their career and political ideology. They cannot be going on the same stage with Opposition leaders since they are civil servants who are meant to carry out government policies. I have never made any threats or asked them to quit if they support the Opposition,” he said.

He added that it was a fact that some teachers, including principals, hold positions in Opposition parties, including PKR and PAS.

“I believe parents would want these teachers to focus on teaching their children.

“They should not turn the classrooms, school assemblies or teachers’ rooms into ceramah sessions.”

Mahdzir said he had given the same directive to teachers who support the Barisan Nasional.

“I am consistent in my message – remember your role as teachers,” he said. 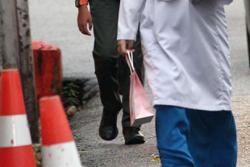