An artist's impression of the Penang undersea tunnel.

Its deputy commissioner Datuk Seri Azam Baki said more would be called up for questioning as investigators zoom in on the payment and awarding of the feasibility and detailed design studies of the undersea tunnel.

“Give us some space to carry out our investigations. We are still in the process of recording statements from important witnesses that we believe may help to wrap up the probe.

“We will call in a few more ‘important individuals’ soon,” he said Friday.

Meanwhile, sources said investigators are now looking into the payment process for the studies and whether the companies involved were competent to conduct them.

The sources added that investigators were in the midst of recording statements from witnesses of the companies involved in the feasibility studies to determine the payment process and whether the cost of RM305mil was the true value or inflated.

It was reported that graft-busters were zooming in on the land swaps of two plots of land in Bandar Tanjung Pinang.

The MACC had conducted raids on 12 locations in Kuala Lumpur and Penang and recorded statements from 12 witnesses.

Officers from the State Treasury Department, State Economic Planning Unit, Penang Public Works Department, the state Land and Mines office and a director of a company were questioned Thursday (Jan 11).

Two high-ranking bosses of development and construction companies were remanded on Wednesday (Jan 10) in connection with the case.

The project involves a plan to bore a 6.5km tunnel below the seabed to connect north Butterworth and the island. The tunnel is to connect Bagan Ajam, a mature suburb about 5km from the Butterworth ferry terminal, to the end of Gurney Drive near the Pangkor Road junction on the island.

Connected to the project are three paired roads to be built on the island as a traffic dispersal system to cope with the traffic that the tunnel would bring to Gurney Drive, which is already densely developed.

The three paired roads are from Teluk Bahang to Tanjung Bungah, from Pangkor Road to the Tun Dr Lim Chong Eu Expressway and from Air Itam to the expressway near the Penang Bridge. 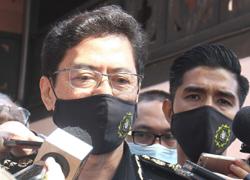