KUALA LUMPUR: To walk the talk, Yayasan Gamuda volunteers have stepped in to help run Kedai Jalanan, the street store for the homeless and urban poor which won the Star-Gamuda Inspiration Award and the Star Golden Hearts Award last year.

Gamuda Land chief architect Eddie Chan, 57, said the foundation has been cultivating the values of volunteerism among the staff for years, and the best way to do this was to get them personally involved in efforts to enable and uplift the community.

“It wasn’t hard to get the younger staff to join as they’re a pretty enthusiastic group,” he said.

But the volunteers weren’t just limited to the younger staff as Chan himself has been with Gamuda for 17 years.

On Sept 7, 60 Yayasan Gamuda volunteers including its board of trustees member Anas Zubedy lent a helping hand at the Kedai Jalanan event in Medan Tuanku which provided free clothes and toiletries to the homeless and urban poor here.

Chan said the efforts of the volunteers that night were the culmination of four months of planning and collecting clothes from Gamuda staff. Nearly 2,000 items of clothing were collected.

Kedai Jalanan founder Dr Rusaslina “Lin” Idrus, 44, said the volunteers enabled the programme to go on as scheduled. They took over the task which would have been done by her students from Universiti Malaya but most of whom were not in town because of the semester break. 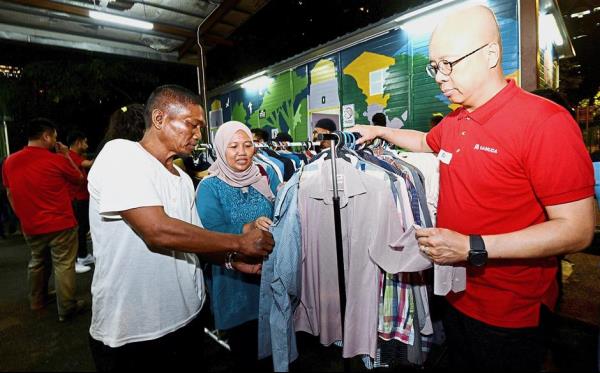 Kedai Jalanan is held once a month in Jalan Panggung with about 100 customers, and once every three months in Medan Tuanku with about 400 customers.

With RM50,000 from the Star-Gamuda Inspiration Award and RM3,000 from the Star Golden Hearts Award, Kedai Jalanan has been able to offer a mobile clinic and build a database of other aid efforts and essential information like the location of public clinics and places to shower.

“I tell my students that this is not charity. It is a civic engagement to get to know about society and about responsibility,” said Dr Rusaslina.

Talent management executive Stefanie Sze, 27, said it was her second time volunteering for a Yayasan Gamuda project, having worked on building greenhouses for orang asli farmers in Ulu Gumum, Pahang before.

“When it comes to giving back, the only question is why not? We’re such fortunate people, we ought to help,” she said.

Secretarial assistant Amir Zakwan, 25, said the project was also valuable because it gave them the opportunity to work with fellow Gamuda colleagues from different departments with whom they might not normally interact.

Former driver Jalaludin Abd Rashid, 55, said the clothes offered by Kedai Jalanan were more useful in the long run than the food handouts given by soup kitchens.

“Food today, full today. With these clothes, hopefully I can find some work,” he said.

Having been homeless for four months since Hari Raya Aidilfitri, Jalaludin said he usually stayed around Dataran Merdeka and Titiwangsa but he made it a point to travel to Medan Tuanku for Kedai Jalanan.