Malaysia's organ donation rate among lowest in the world 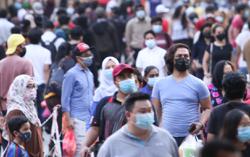 JELEBU: The organ donation rate for organ and tissue transplants in Malaysia is among the lowest in the world, says Negri Sembilan Health director Dr Abdul Rahim Abdullah.

He sais that the current rate stood at 0.6 donors per one million population, which was very low compared to its demand.

"The number of death cases due to road accidents in the country is high, about 7,000 cases recorded each year. Assuming that 10% of the deceased have pledged to donate, then more deserving patients will not have to wait for a long time for their organ transplants.

"Therefore, the society must also aware that families of the deceased who have pledged to donate their organs or tissues need to be ready to allow transplant procedures to be carried out," he said here Tuesday.

Dr Abdul Rahim was speaking at the A Gift of Life Health Forum in conjunction with the Jelebu level Organ Donation Month 2016, organised by the Jelebu Hospital.

He said based on statistics from 1997 to August this year, the state had recorded the highest number of people who had pledged to donate organs with 16,900 submissions, or 4.69% out of 359,918 people who had signed up nationwide.

A total of 352 people from the Jelebu district had signed up as donors from 2013 until August this year, he said.

He said until August this year, a total of 17,458 people had signed up as donors.

However, Dr Abdul Rahim said the numbers only represented 1% out of 30 million Malaysians. He also said at the moment, more than 20,000 patients were reportedly on a waiting list for organ transplants including those suffering from kidney, liver, heart and lung failures.

"They rely on caring Malaysians who are ready to help them by donating organs," he added. – Bernama