Flashback: The recent front page report of The Star on foreigners snapping up pre-war buildings in the heritage zone.

GEORGE TOWN: The state government is looking at re-introducing the repealed Rent Control Act 1966 to prevent the inflation of property rentals in the George Town heritage site.

Chief Minister Lim Guan Eng said the move would stop gentrification that was driving the locals and living heritage away from pre-war houses in the core and buffer zones of heritage site.

He said the proposed enactment would be an improved version of the Rent Control Act 1966 and houseowners would only be allowed to impose rental according to market rate.

Before the Act was repealed in 1997 and enforced in 2002, city dwellers and business owners only paid pittance to the houseowners.

Lim said the enactment would be in accordance with the definition of the previous Rent Control Act 1966, adding that they were concerned over the high increase in rentals after the pre-war buildings were bought over by foreigners

He said they had been monitoring the issue closely but chose not to interfere previously as Malaysia is a free enterprise.

“We are still discussing the mechanism on carrying out the impmentation. We believe the enactment is vital to safeguard the interest of our living heritage.

“The property owners will be given notice on our proposed enactment.

“What we want is a fair and reasonable rental rate. Of course, the rental should not be way below the market rate.

“But it should not be an exorbitant increase that amounts to 100% or 200%. Maybe we are looking at 20% increase over five years,” he said during a press conference at Komtar yesterday.

The Star had earlier reported that the pre-war property market in the heritage enclave could be overheating with foreign corporations “snapping them up by the rows” and causing the rentals to skyrocket.

After evicting the old tenants and sprucing up the shophouses, the foreigners are leasing them out at more than 500% of the previous rent.

A row of 12 shops near the Komtar-end of Jalan Pintal Tali (Rope Walk previously) has been dubbed ‘Little Singapore’ because of the similarities with how restored pre-war houses in the republic look like.

Lim said he would ask the state legal adviser to refer the matter to the Attorney-General on whether enacting the new law comes under the purview of the state government or Federal Government.

“As we all know, the Act was abolished under Article 76(4) of the Federal Constitution that passes uniform laws for all states.

“If this is out of the state’s jurisdiction, then I will table a Private Member’s Bill in Parliament, so that the new law can be enforced in the George Town heritage zone.

“If we have the jurisdiction, then it will definitely be enacted at the state assembly,” he said.

He also said George Town World Heritage Incorporated would be the secretariat and its general manager Dr Ang Ming Chee would take charge of the logistics and infrastructure. 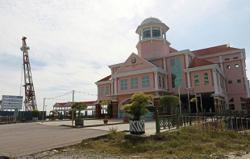