It’s so easy to buy and sell wildlife

It took just two days and fewer than 20 exchanges over WhatsApp for a Brahminy Kite (pic above) hatchling, a protected species in Malaysia, to be delivered to a buyer. The bird was priced at RM600 and was paid for upon delivery at, of all places, a hair salon.

EXCLUSIVE: KLANG: Despite all the efforts by the Department of Wildlife and National Parks (Perhilitan), it is still easy to buy and sell wildlife in Malaysia, especially with the social media being used as the platform for transactions.

The Star’s reporter set out to buy a Brahminy kite (Haliastur indus), a totally protected species, and was able to get a bird in just two days after fewer than 20 WhatsApp messages.

The eaglet, priced at just RM600, was delivered to the point of sale - a hair salon in a shopping complex here on Friday.

Under Schedule II of the Wildlife Conservation Act 2010, anyone having a Brahminy kite, also known as “lang merah”, can be fined up to RM200,000, jailed up to 10 years, or both.

The Brahminy kite is a medium-sized bird of prey in the family Accipitridae, which also includes other raptors, such as eagles, buzzards and harriers.

The aborted sale of the hatchling was a reflection of the many illegal wildlife deals taking place in and around Malaysia, particularly the Klang Valley, no thanks to the anonymity of social media.

Before the arranged “sale” of the protected bird on Friday, The Star called Perhilitan officers to inform them of what was about to take place.

Minutes before the transaction, officers moved in on three women at the salon and rescued the bird.

The women, believed to be in their 40s, were detained briefly but let off later as they were found to be only the runners and not poachers or the real sellers.

Like elsewhere in the world, the social media has increasingly become the new battleground for the illegal wildlife trade in Malaysia.

“There are groups on our radar but it takes time to research and build a profile as usually it’s a network of people involved in the trade.

“From the main poachers to resellers and runners, they can be family members and close friends,” he added.

One source that The Star spoke to claimed that he was in touch with over 35 WhatsApp groups set up under the guise of discussing mutual interest in wildlife.

“In reality, these groups are formed with the aim of generating market interest for protected species such as slow lorises, Asian leopard cats and even baby tapirs,” he said.

In addition to WhatsApp groups, such protected mammals, birds and reptiles are marketed even more blatantly on Facebook and over e-commerce sites where dealers post fake advertisements of and use code words like “white plastic”, “African materials”, “jelly” (for ivory), “black” (rhino horn) and “red” (bill of the hornbill) to seek interested buyers.

The arrests and seizures were part of the department’s Ops Taring III, targeting the online illegal wildlife trade.

The critically endangered orang utans were smuggled from Sumatra to Malaysia by two Indonesians who handed them over to two locals, one of whom later advertised the sale of the apes on social media.

Abdul Kadir said ignorance and plain disregard for the law on the part of the buyers were also factors driving the demand and sales of wildlife in Malaysia. 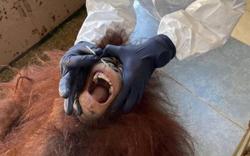