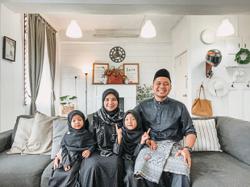 KLANG: How do you take an RM75,000 loan and turn it into a two-storey home with freehold land to boot? Ask Muhamad Azree Abdul Rahim, because this 26-year-old had done it.

He bought land in Kampung Sijangkang, Telok Panglima Garang, near here, and erected a two-storey home there - using a used shipping container.

While young adults around him lament the rising cost of living and the difficulty of owning a home, the lad from Kluang, Johor, decided to break free of conventions. He owned a home without breaking the bank, and he did it without being shackled to a 30-year housing loan.

This writer visited his home recently and was amazed to find how his container house had all the trappings of a home. There was an adjoining kitchen, a bathroom and a dining and living area. There was even room for a queen sized bed.

He grows his own food in the organic garden outside the house. The house stood on agricultural land fertile enough to even propagate stevia, which he sells for supplementary income.

His decision to live in a container home was not one made on a whim. It was one well thought out and backed with extensive research.

“I did not want to rent anymore. I had done my calculations and found that over the years, I had lost thousands of Ringgit on renting rooms in sub-par homes. By the end of it, I had nothing to my name,” said the web and systems developer who prefers to be called Azree.

While looking at properties to buy, he found that the houses he could afford were all in a state of disrepair or simply not worth the price.

He gave up the idea of buying a conventional home and instead searched for freehold land within the range of RM30,000. With a salary of RM3,500 and a car loan to service, he wisely decided to keep his debts low.

He found a plot of freehold agricultural land in Kampung Sijangkang, on sale for RM35,000. It was some 25km from Shah Alam, where he was working at the time.

I have not even heard of Sijangkang prior to that, but I was excited. I went to check out the place the following day, surveying the amenities and my would-be neighbours.

"It was near major highways and that would ease my journey back home to Johor as well as my commute to work. There was also a fishing jetty. I love the outdoors, so that sealed the deal for me, said Azree, who also enjoyed paragliding, camping and cycling.

When he told his neighbours that he was going to build a house, surprise registered on their faces.

“They wondered what my budget was because it costs a small fortune to do piling on loose peat soil. They also wondered what kind of house I could build without proper piling,” he recalled.

Azree was not able to secure a housing loan as the land was under a shared grant.

Instead, he took a personal loan totalling RM75,000 that needed to be repaid over five years and bought the 2,400 sqft plot.

He had the land, but now he needed to build a home. He found that the most fuss-free house to be built on agricultural land would be a container home.

Muhammad Azree tends to his garden where he grows organic herbs and vegetables. At 26, he is the proud owner of his own plot of land and a home made from used shipping containers in Kampung. -Bernama PIC

The day after his loan was approved, he went to a factory that sold used shipping containers. He bought a 20 feet unit and ordered for the windows, doors and exhaust fan outlets to be cut in. It was also to be coated with anti-rust and fitted with vinyl flooring.

The following week was a hectic one for Azree. As the son of a Felda settler who had also built his own home, he knew that he had his work cut out for him.

He had to clear the land, dig up the hole for the septic tank and drainage and tar the path leading up to his future home so that the container and construction materials could be brought in.

He hired his brother as the main contractor to settle the plumbing, wiring and other utility issues.

Fifteen trucks of recycled cement mixture were used to build the foot-high base of his home so that it would not sink into the loose soil. While awaiting the cement to dry, he checked on the status of his container unit in Banting, regularly urging them to expedite the welding and painting process.

Time was money. It was September 2014. He was due to move out of his rented home by the end of that month and the workers were waiting to get started on his home.

It was only on Oct 31 that his container was transported to the site. Its paint had yet to dry, the toilet was not ready and there were no electricity or water supply.

“Luckily, my neighbours were kind enough to let me source my water and electricity supply from them,” he said adding that he later added another floor using fascia board.

Today, Azree believes his initial struggles were worth it. He has a home and land to call his own, which he would finish paying off in four years.

After a year of living in his container home, he was able to answer the most frequently asked questions about it.

Was it hot, living in a steel home?

Azree says while it is true that metal heats up easily, the problem could easily be countered.

“Put in ventilator fans and windows. Build a roof so as not to expose the unit directly to the sun. Once the sun is down, the container actually cools down very rapidly. The house is much cooler at night than brick houses, which retain heat long after the heat source is gone,” he said.

Container homes can also be insulated against the heat by installing wooden or Styrofoam panels along the walls. However, Azree says that polystyrene was more flammable than wood and would be a poor choice for those with a smoking habit.

How long would the house last?

“Have you seen the old Volkswagon campervan? Those are made of steel and have been on the road for over 90 years. As long as it is well taken care of, container homes can last perhaps even 200 years. If you use a good paint, it may be 20 years before you would need to repaint it,” he said.

What about the safety of a steel house during a lightning storm?

I have installed a lightning arrester and earthed the circuit. Any lightning that strikes my house would immediately be earthed without affecting the occupants.

What if he wanted to start a family?

"There is ample space in my home for even a family of four. I barely occupy the upper floor as everything I need is down here. Once, 16 of my family members visited and no one had problem finding space to sleep," said Azree, who is still unattached.

Can container homes be upgraded?

“Sure. Go as high or as wide as you like. In New Zealand, they even built shopping malls from used containers. Im thinking of adding another unit myself,” he said. -Bernama