Putting the brakes on car theft

In my last article “Throwing light on crime statistics”, I mentioned that the crime index comprises two components – violent crime and property crime.

Property crime accounts for 80% of the total crime in Malaysia.

In this article, I will be drilling down the numbers on property crime.

I believe that there are many things that we can do to prevent property crime from happening.

We can split property crime into two broad categories – theft of personal property and household crime.

The first category refers to stealing of wallets, credit cards, phones as well as snatch theft without bodily injury. The thief takes what is with you while you are outside in public space. 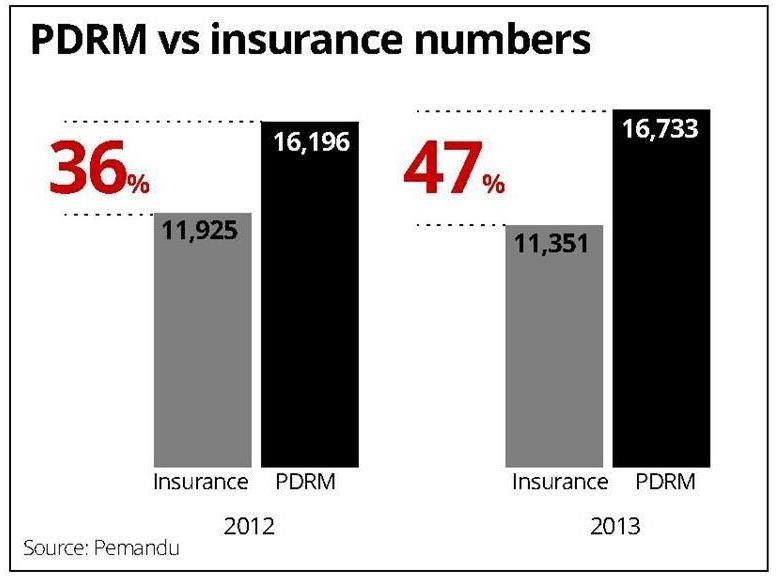 The volume of this crime is about 20% of the total property crime.

This crime, though petty in nature, creates a lasting impression of feeling unsafe walking around in public areas.

This accounts about 80% of the total property crime in Malaysia.

Within this category, 75% are motor vehicle theft related and 25% are house break-in.

Similar to the above petty crime, house break-in creates a lasting impression in our mind of feeling unsafe. 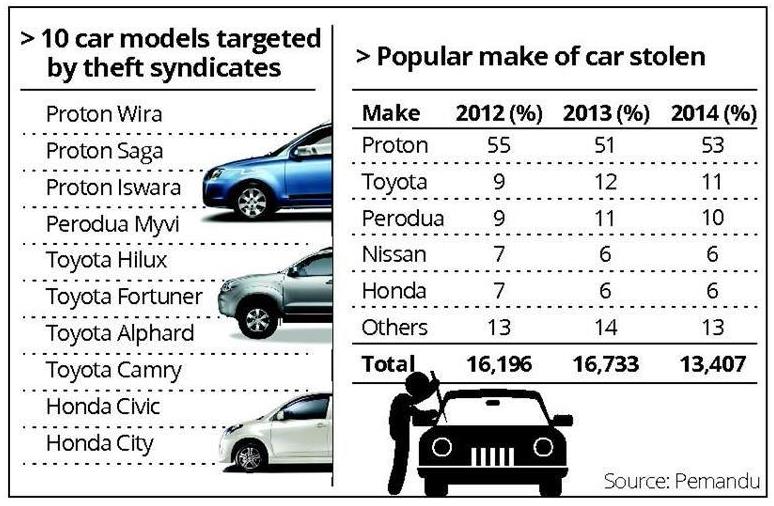 In this article, I will be discussing car theft that makes up about 20% in the motor vehicle segment. There are two reasons why I am addressing car theft:

> The number of car theft came down by 20% last year since we started the NKRA five years ago.

There are two major car thefts that we have been addressing since early last year.

> Transnational smuggling – where new luxury or popular cars are stolen and sent out of the country.

> Parts cannibalisation – where cars are stolen and broken down to spare parts level to service other cars (probably older cars).

Car theft of the above nature is mainly an organised crime with many layers of parties involved.

The cars are stolen for criminal motives for sale or disposal of parts through the black market.

The other nature is for opportunistic reasons such as joy-riding and short-term transport – which is low in number and not covered in our scope.

Today we lose one car every 45 minutes.

This is the first time the number came down since we started the transformation in late 2009 (Figure 1).

The are three categories in this sector (the percentage in brackets denote the percentage of the establishments for the purpose):

The above shows that there are about 90% establishments supporting the repair and accessories market.

The business value of this market is about 50% of the purchase value of new cars per annum.

When we first started the NKRA, the value of new purchase was in the region of RM60bil per annum.

The supply of the secondhand parts may come from the stolen cars that were broken down into parts level. This is a very lucrative business. The insurance claims for parts in 2012 were in the region of RM5.4bil.

When we compare the number of reported car thefts from the police and insurance company, we saw a huge gap of about 40%.

The number of reported car thefts with the police is 36% and 47% higher than those reported to the insurance companies in 2012 and 2013 respectively (Figure 2).

It is not logical to say that the police have toned down the statistics when their numbers are higher than the numbers reported by the insurance association.

The reason for the difference could be third party insured cars stolen where the victim reported it to the police but not to the insurance companies.

This also supports the theory that many ageing cars are being stolen for parts.

The top ten vehicles targeted by the theft syndicates was published in The Star in 2012.

From our analysis, Proton has the highest number of cars stolen, followed by Toyota and Perodua in 2012 and 2013 (Figure 3)

Let me share on the approach we took to reduce car theft in 2014.

Firstly, we have good collaboration within the many parties in the motor vehicle business.

As I said, most of the car theft is an organised crime. Hence to fight this, the police will not be able to do it alone. We brought many parties to three sequential labs:

> First lab – we define and measure the problem. Our intent is to understand the magnitude of the problem and to see the business flow of car theft in Malaysia

> Second lab – we analyse the problem. Here, we bring many experts from the industry to validate what the team members gleaned from the data

> Third lab – we improve the situation by addressing gaps at ground level as well as at policy level. This is still an ongoing exercise for both the transnational smuggling and parts cannibalisation components.

Below is the snapshot taken from the GTP Annual Report 2014 that was recently released.

According to Mohd Yusuf Idris, the coordinator for the vehicle theft reduction council (VTREC) of Malaysia, a non-profit organisation set up by the insurance industry: “This year, with the collaboration of Pemandu, we have seen an increased and a more structured effort taken by all our stakeholders (including PDRM, Road Transport Department (Jabatan Pengangkutan Jalan or JPJ), Customs and the insurance industry) in our approach in tackling vehicle theft.

“From March to June this year, VTREC together with Pemandu organised three workshops to identify the administrative weaknesses within the eco-system of the motor industry that may affect car theft.

“Having identified the weaknesses, we recommended a 24-point initiative for both the long term and the short term that we think will drastically reduce the opportunity for car theft.”

The workshop held last year identified two main areas that require additional attention, namely the cannibalisation of vehicle parts and the smuggling of stolen vehicles through ports and borders.

Based on a research carried out in the USA, a car is stolen every 44 seconds.

We lose one car every 45 minutes.

There are some interesting insights that we may ponder over for ourselves.

More than half the thefts occur in areas where the cars are parked without attendants.

Nearly half the theft is due to driver error such as leaving the keys in the ignition or leaving the doors unlocked.

From that research, let us remind ourselves to use common sense such as closing all windows and doors when parked and never to leave valuables in the car.

As the saying goes, the police cannot protect us all the time.

If we make it easy for someone to steal from us, someone will.

Let us be united against crime and work together to peel away the layers of car theft to keep our property safe and have good peace of mind.

Datuk Dr Amin Khan is Director of Pemandu’s Reducing Crime NKRA. He can be reached at aminkhan@Pemandu.gov.my.

The views expressed here are entirely his own. Readers may also share their views at http://unitedagainstcrime.com.my