KUALA LUMPUR: Many continue to harbour hopes of getting rich the easy way and ultimately, their greed would result in them being conned by scam syndicates.

“The lesson here is that if an offer is too good to be true, it often is exactly that,” said Federal CCID director Comm Datuk Seri Mortadza Nazarene during an interview recently.

He lamented that there were still people who had not paid attention to numerous warnings by the authorities on the danger of money scams.

“There is no such thing as easy money. You are making yourself an easy target for the scammers waiting to prey on unsuspecting and often gullible victims,” he added. 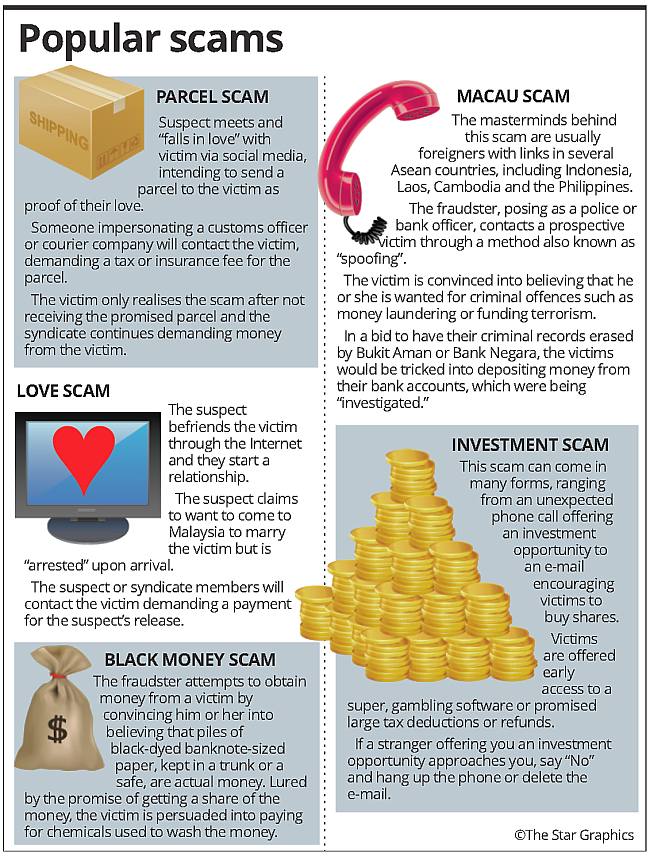 Statistics compiled by his department showed that last year, there were 1,018 cases of African scams, including parcel, Internet, black money and love scams, involving RM52.12mil in losses.

A total of 1,047 phone scams or Macau scams were reported, which caused RM71.67mil in losses, while RM53.36mil were lost in 286 investment scam cases.

He said his department was now communicating with Facebook management to monitor cases of Malaysians involved in Islamic State activities.

“Our department needs to be aware of the evolving changes of methods in white-collar crimes. Working with budget constraints and a lack of personnel can be a hindrance. Nevertheless, our staff are working hard to stop such crimes from getting widespread.

“Our department needs state-of-the-art equipment to track down these criminals. We also need to send our officers for training to keep up with the latest technology and information on the various money scams that are happening,” he added.

Comm Mortadza thanked the Government for allocating funds for his department to upgrade equipment and technology to track down the scam artists.