KUALA TERENGGANU: The constitutional crisis in Terengganu may have been averted after one of the three Barisan Nasional assemblymen who quit Umno retracted his resignation while another is close to being persuaded to return following intervention by top party leaders.

State executive councillor for Tourism and Culture Datuk Mohd Jidin Shafee, who is Permaisuri assemblyman, said Roslee had done so after being advised by his Umno colleagues.

However, former Mentri Besar Datuk Seri Ahmad Said, who ignited the crisis by refusing to go quietly, was still holding out.

It is understood that Commu­nications and Multimedia Minister Datuk Seri Ahmad Shabery Cheek played a key role in the negotiations with Ahmad.

Both are from the Kemaman Umno division, of which Ahmad is chairman and Shabery the deputy.

Ahmad Said, who resigned from Umno on Monday, had taken along with him Ghazali and Roslee, hours after the new Mentri Besar Datuk Ahmad Razif Abdul Rahman (pic below) was sworn in before the Sultan late that night.

It had been a dramatic day in Terengganu following Ahmad Said’s resignation.

Terengganu had been rocked by rumours that more assemblymen would be jumping ship and even that the State Legislative Assembly would be dissolved.

However, it had been an anti-climax, now that one assemblyman has decided to stay with Umno and another is set to do the same. While the negotiations were going on in Terengganu, other Barisan Nasional assemblymen were hunkered down in Putrajaya and they are expected to meet the Prime Minister after the Cabinet meeting today. 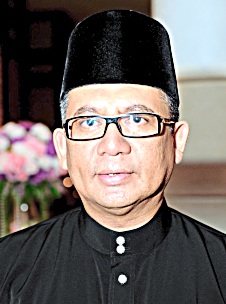 Earlier, the palace and the state assembly building in the heart of this oil-rich state were quiet in contrast to the roller-coaster ride of its politics.

Reporters waiting at the entrance of the palace in Bukit Cendering and the state assembly building expecting these places to be a hub of activity yesterday left disappointed.

There was hardly any movement at the palace, except for members of the press milling about at the entrance waiting for the rumoured arrival of the state Speaker.

There were no signs of the state Speaker or Ahmad Razif asking for the Sultan’s consent for the dissolution.

At the Mentri Besar’s official residence where Ahmad Said was said to be holed up, there was no sign of him vacating what has been his home for the past six years.

Pressmen were led on a cat-and-mouse game with local politicians as both Ahmads (Ahmad Razif and Ahmad Said) have been elusive over their activities.

While the political manoeuvring and negotiations are at an all-time high, state events, including the Terengganu Umno liaison meeting, have been cancelled or postponed.