Worst water shortage occurred in 1998 with 150 days of rationing

PETALING JAYA: The country’s worst water shortage happened in 1998 when drying dams caused water to be rationed for nearly 150 days for 3.2 million residents in the Klang Valley.

The episode – dubbed the “national­ water crisis” – was triggered by a protracted dry spell in the Klang Valley and parts of Negri Sembilan, Malacca, Penang, Kedah and Perlis from March that year.

The dry spell was said to have been brought about by the drought-inducing El-Nino phenomenon when the surface temperature of the Pacific Ocean became warmer, causing unusual­ly dry conditions in many regions across the globe.

A water rationing exercise for the Klang Valley started in April 20, 1998, and ended on Sept 16 that year while in Negri Sembilan, a similar exercise, which started in October 1998, only came to an end in May the following year.

Besides sending out water tankers to the affected areas, many other measures were taken to help counter the shortages during the rationing period.

The Subang Jaya Municipal Council (MPSJ) rented out some of its static tanks for private functions during the water-rationing exercise while Kuala Lumpur City Hall placed 90 static tanks at its public housing flats and longhouses.

Two water treatment units drawing water from the Mines Wonderland Lake were also installed as a back-up to cater for the Commonwealth Games that year.

Some unconventional methods were also considered – a local bomoh sent a proposal to then Works Minister Datuk Seri S. Samy Vellu, offering to use “mystic powers” to create rain over catchment areas in the Klang Valley.

Following the end of the rationing exercise, then Selangor Mentri Besar Datuk Abu Hassan Omar said it had spent about RM50mil, of which RM24.9mil went towards the hiring of water-tank lorries.

An extra RM13.5mil was spent to dig tube wells as well as RM8mil to buy ultrasound units to detect ground water and RM3.4mil for staff overtime. 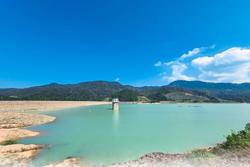