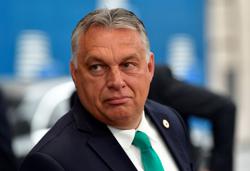 KUALA LUMPUR: Tun Dr Mahathir Mohamad has accepted that George Soros is not to be blamed for the 1997 Asian financial crisis.

Dr Mahathir, who once called Soros a moron, said: “Soros said he was not personally involved in the devaluing of the Malaysian currency and that the devaluing was done by other traders. I accepted that.”

He was speaking to reporters after a one-hour meeting with Soros at a five-star hotel here.

Dr Mahathir was asked whether he had forgiven Soros and changed his perception of the man.

“It has certainly changed. That is why I talked to him. It is not a question of forgiveness. He didn’t do it. I accepted that he didn’t do it. That’s all.”

Asked whether his earlier opinion of Soros was formed because he didn't have the right information, Dr Mahathir said: “I read about it in the press. I had no personal meeting with him.”

Dr Mahathir, who recently had a heart attack, was a picture of health when he arrived at 10.55am for the meeting, while Soros, who was staying in a nearby hotel, arrived 10 minutes later.

Dr Mahathir and Soros seemed at ease as they sat next to each other on a sofa at the presidential suite of the hotel.

During the press conference, Dr Mahathir helped translate what was said in Malay into English so that Soros would understand.

The former premier described their discussion as very good and said they shared the view that war was not the solution to problems, and that root causes in the Israeli-Palestinian crisis should be tackled.

Asked the reason for the meeting, Soros said: “We had exchanged correspondence. Dr Mahathir is interested in promoting peace in the world. I felt that the idea of getting people to renounce war is not enough.

“We are both concerned about the future of civilisation.”

During the meeting, they also cleared the air over Dr Mahathir being labelled anti-Semitic following press reports during the 1997 financial crisis which highlighted his criticism against Soros, who is Jewish.

Dr Mahathir said he was not anti-Semitic and believed that if anybody did something wrong, everyone had the right to criticise that person regardless of race and such.

However, they did not touch on currency speculators during the meeting. Dr Mahathir and Soros do not share similar views on the matter.

Dr Mahathir said he was still concerned about currency speculators destroying the economies of poor countries.

“I am still against it. I don’t think there is a need for such actions in order to make correction,” he said.

Soros, however, said authorities should decide how the market functions, whether under capital control or under certain conditions, while speculators act according to prevailing rules.

“Knowing the market, sometimes it’s appropriate to impose some restrictions on capital movement. The way things are right now is that the markets find ways to adjust themselves,” he said.

“There is a danger of excessive capital movement because financial markets are inherently unstable. It is the role of the authorities to maintain stability.”

Currently, he said, the authorities were doing a good job.

Asked to comment on Malaysia’s currency management now, he said: “I’m no longer active in the financial market. I can’t answer that question.”