PENANG: After a year of research, a local inventor has come out with a prototype of what he claims to be a specially-designed rice cooker which can remove starch from rice.

Henry Lourdes John, 36, said the cooker would be a boon to diabetics and those on a diet as it could suck out the starch through a pipe-like device when the rice is almost cooked.

He said normal white rice contained a high percentage of refined carbohydrate or starch, and a high intake of this could lead to sugar imbalance, diabetes, heart disease and obesity.

“However, rice is the staple food of Asians and we eat rice at least once a day,” he said.

He had applied for a patent for his product early this year.

John, a quality engineer at a multinational corporation in Bayan Lepas, said he thought about coming up with a “healthy rice cooker” when his father was admitted to hospital with heart disease about a year ago.

“My mother had to manually extract the starch by first boiling the rice and then pouring away the starch when the rice is almost cooked.

“This gave me the idea to devise a rice cooker that can do about the same thing,” he said.

John explained that his cooker worked like any normal rice cooker where rice was boiled until cooked and the only difference was that it had several extra parts, including the pipe-like device to remove the starch.

“When the rice is almost cooked, the device would be triggered and a vacuum would suck out the starch via a pipe on the side before cooking is resumed,” he said, adding that the user needs only to add water.

“The rice cooker also has other features for steaming, warming, reheating and boiling,” he said.

He said the cooked rice would have a slightly different texture as it would be less sticky, but the taste was not very different.

Caught in the spirit of kaizen (the art of innovating) when training in Japan more than a decade ago, John said he had since invented about 30 mechanical and electrical consumer products, car accessories and toys.

Among his inventions are a patented overshoe which is a protective cover for normal shoes, and a plug protector which is widely available in the market now.

“Three of my other inventions – an atomic puzzle game, a flexible iron and a car wiper protector – are in the process of being tested by manufacturers interested in marketing them,” he said.

Manufacturers keen to market John’s latest invention can contact him at 012-427-0331. 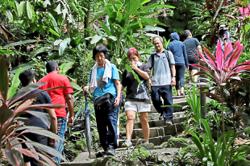