Woman admits to being 'contractual girlfriend' to 30 men

> Woman admits to being 'contractual girlfriend' to 30 men
A 20-year-old woman has admitted becoming a "contractual girlfriend" to more than 30 men since she was in Form Five. The woman, who wanted to be known as Fira, says that peer pressure and the lure of a lavish lifestyle made it easy to choose the job, after being persuaded by a friend. The role of a contractual girlfriend includes going on dates with male clients and accompanying them to social events, on shopping trips and going on vacation with them. The length of the "contract" can vary from one hour to three months, depending on the how much the client is willing to pay and his requests. Fira also revealed that she has eight boyfriends at the moment to support her lifestyle and college fees.

> Tourists advised to visit Sarawak if worried about aftershocks in Sabah
Tourists who have made hotel bookings and purchased tour packages in Sabah could change their holiday destination if they are concerned about aftershocks in Ranau. Tourism Ministry deputy secretary-general (management) Dr Junaida Lee Abdullah said the crisis management team has suggested visitors change their destination to Sarawak. She assured, nevertheless, that Sabah is still a safe place to visit. A strong aftershock measuring 5.2 hit Ranau last Saturday after a 5.9 magnitude earthquake left 18 people dead on June 5.

> Girl stuck in washing machine rescued
Firemen managed to rescue a three-year-old girl who was stuck in a washing machine. The firemen had rushed to the girl’s house in Johor Baru after receiving a call for help at 3.38pm on Saturday. The girl was removed from the washing machine about two hours later. The report however did not state how the girl became stuck. 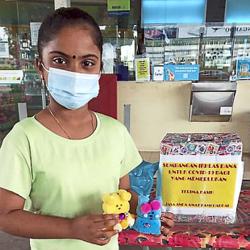