Pandemic challenge: While there exists the digital e-Census, Malaysians have traditionally preferred to answer questions face-to-face.

IT is important for more people to contribute to the ongoing Malaysia Population and Housing Census (Census 2020), a survey conducted once every 10 years by the Statistics Department (DOSM), to improve data-driven policymaking, highlight public needs, and ensure national resources are channelled efficiently.

Initially meant to be completed mid-last year, the census was restructured and its timeframe has been extended due to the prolonged movement control order, which was introduced to mitigate the spread of the Covid-19.

The pandemic has caused logistical challenges for the 9,500 censor enumerators who conduct nationwide house visits to carry out interviews. While there exists the digital e-Census, Malaysians have traditionally preferred to answer questions face-to-face, which is why better adoption of the e-Census is still needed. With door-to-door interviews temporarily halted during the current lockdown, public adoption of the e-Census is urgently needed to complete data collection of the estimated 32.7 million population by July.

One way to encourage more people in Malaysia to participate in the e-Census and other data-driven research is to highlight the long-term benefits of contributing to these studies.

Public buy-in is key to a good census, says Dr Rachel Gong, a Senior Research Associate at Khazanah Research Institute (KRI). She explains that improving public understanding on policy making, and how the process of data-driven policy can help assess a community’s needs, can steer people to become more willing to contribute meaningful data.

This knowledge can also encourage the public to call for more data to be made available, as this will enrich current studies and support further research that can improve standards of living.

“There are a lot of challenges to collecting this kind of data, but in my opinion it’s worth the investment and the effort to get it done right, especially for the census. But not just the census – when DOSM runs its Labour Force Surveys or Household Income Surveys, I hope people understand why these are important and why they should participate, ” she explains.

Dr Gong emphasises that in order to have good policy-making, Malaysia needs to collect representative, reliable, and valid data in the census, and make this anonymised data publicly available without compromising individual privacy.

“It’s important for everyone to understand more about their personal data and how personal data is being used. If people are willing to give up their data in exchange for services like optimized directions during traffic jams, then there’s no reason they should not embrace the census wholeheartedly.”

Dr Gong points out that there are different types of data that are collected and used for different purposes, including by the private sector, and that as a society we need to think more seriously about responsible data governance by both the public and private sectors.

KRI, a think-tank under Khazanah Nasional Berhad, has employed the census data in most of their major reports, which provide recommendations for policy-making.

“The most direct use of the census is in generating descriptive statistics surrounding population demographics, ” says KRI Research associate Gregory Ho, who adds that data from the census also contributed to earlier KRI projects like those on social mobility.

One of the major problems with regard to government data in Malaysia is the lack of accessibility, and this is mostly due to the absence of an overarching law that fosters government data transparency, says KRI Research Associate Ashraf Shaharudin.

While Ashraf notes that DOSM has increased the volume of data they publish over the years, there is nevertheless still room for improvement. He adds that one of the first steps Malaysia can take is to enact a Right to Information law that shifts the culture of government data from secret by default to open by default.

“This law should embrace digital technology; for example by requiring data release in a machine readable format whenever possible and appropriate, and by establishing a website for users to submit and track information requests. Simultaneously, the government should enact a data privacy law that includes government data, ” he says, addressing the privacy concerns.

The census is important for setting the context on what we know about a country’s population and housing stock, says World Bank Senior Economist Kenneth Simler.

“Because of the census, we know certain fundamental facts – such as the male/female ratio, the urban/rural ratio, and the percentages of the population in different age groups – that help frame specific policy analyses, ” explains Simler.

As such, the World Bank uses the census indirectly all the time in its policy analyses, a recent one being the report on aging in Malaysia, A Silver Lining: Productive and Inclusive Aging for Malaysia. Another indirect use of the census for policy analysis is that the census provides the sampling frame for detailed surveys such as the Household Income Survey (HIS) or Labour Force Survey (LFS), says Simler, who adds that if these sample surveys were not grounded in the census they could give very misleading information.

“Occasionally access has been granted, but more often it has not been granted. In advanced economies and even in many low- and middle-income countries access to microdata is much more open.”

On concerns for privacy, Simler explains that greater data access can be compatible with data privacy and confidentiality protections. For example, there exists many proven methods for anonymizing survey data that are both rigorous and straightforward to apply, and are used by national statistical authorities in every part of the world to protect confidential information.

This can be done with greater commitment and implementation to open data principles, while still protecting individual and corporate privacy and confidentiality, says Simler.

The future for data in Malaysia will require modernisation, better use of technology for data management, and coordination among the many public and private entities that make up the national statistical system, he adds.

When we invest and focus on a cohesive data system, we will be able to create wide-ranging and comprehensive policies that bring the most benefit to the largest number of people.

High quality and accessible data will lead to better design of policies and strategies. One of the major challenges researchers face is getting up-to-date information from public agencies, industry associations, community organisations and others in the ecosystem, says Prof Mahendhiran S. Nair.

While Malaysia has made progress in obtaining data due to the Open Data initiative since 2014, existing laws like the Official Secrets Act still impedes data sharing, says Mahehdhiran, who is Pro-Vice Chancellor (Research Engagement & Impact) at Sunway University.

“Many agencies are reluctant to share data due to the OSA and many of them do not know what is confidential and what is not. Hence, many of them apply the blanket rule to prohibit the sharing of a majority of data generated by their institutions.

“There is a need for a better system to ensure safety and security of confidential information; but this should not curtail the dissemination of other information that are relevant to the public, industry, research community and other stakeholders, ” he says.

Lack of standardisation in capturing and reporting data across the different agencies and institutions should be addressed by improving technology and infrastructure.

It is also important to retain data science talent as there is a high demand for their expertise locally, and introduce appropriate regulations to ensure transparency and accountability among the agencies that generate the data, says Mahendhiran.

“Big data is going to transform the way we design policies, corporate strategies and intervention programs. To enable this, a robust and sound data ecosystem is critical.”

Census 2020 is vital for nation-building 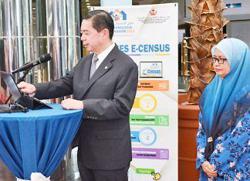