Birdwatchers in the Belum-Temenggor forest.

TO keep an extra eye out for wildlife poachers, bird watching groups can be roped in by the authorities to assist them.

In suggesting this, Malaysian Nature Society president Prof Dr Ahmad Ismail says there should also be incentives to those who help the authorities in monitoring poachers.

“This can be done by registering birders and hobbyists who can help the authorities, ” he says.

While efforts by the Department of Wildlife and National Parks (Perhilitan) are lauded, Prof Ahmad says more can be done to monitor activities in hot spots for bird catchers.

“There should be more collaboration with non-governmental organisations and bird watching groups to provide a good reporting and response system between Perhilitan and birders, ” he proposes.

He also urges for continuous effective education among the public in both rural and urban areas on the importance of protecting wildlife and the environment.

There were previous reports in the media about wildlife moving closer to human settlements due to a generally calmer environment from fewer public movements in the lockdown last year.

With more people at home and less traffic, Prof Ahmad says there’s a possibility that poachers may have taken the opportunity to carry out their illegal activities without knowing the authorities are still watching.

“Bird catchers also capture those that aren’t protected like doves, pigeons and magpie robins. Some of these birds are also in demand and smuggled to other countries.

“If over hunted and with habitats shrinking, these birds stand to be endangered too, ” he says.

Between January and April this year, a total of 44 crimes against wildlife were recorded by Perhilitan, with most involving the wildlife being kept illegally or without permits from the department.

Most of the animals in these cases are bird species such as white-rumped shama (murai batu), eagles and jungle fowls.

As one of the top bird species targeted by wildlife traders, Prof Ahmad says white-rumped shamas are songbirds that create melodious sounds and are popular as highly priced pets.

Such birds are a protected species monitored by Perhilitan under the Wildlife Conservation Act 2010 in Peninsular Malaysia.

“Even though they are protected by the law, they are still being smuggled in the caged bird trade. That’s why there is a need for more control, ” he adds.

She says it’s possible that the more relaxed movement control order this year contributed to increased detection of wildlife crime.

“Pandemic related movement restrictions are not the only explanation for the rise and fall in wildlife crime.

“Such changes could be attributed to several other factors including traffickers finding new methods and routes, and higher enforcement efforts, ” she adds.

Elizabeth says Traffic hopes there will be more in-depth investigations all the way to the top of criminal networks and syndicates. 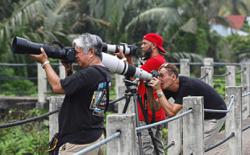