The right time for a rendezvous 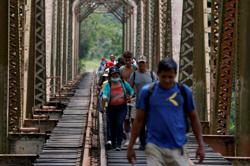 Face to face: Biden meeting Xi in 2013 in Beijing. Diplomatic chatter is suggesting that they meet in Singapore in March 2021 during the World Economic Forum there. — AFP

IT could not have come at a more opportune time. After a long three weeks, where President Joe Biden affirmed there was “no reason” to call President Xi Jinping, the call finally happened just two days prior to the beginning of the Lunar Year of the Ox.

The key issue now: given the weight and importance of a healthy Sino-US relations to stabilise the whole of Indo-Pacific, how quickly must they meet?

Diplomatic chatter is suggesting that they meet in Singapore in March 2021 during the World Economic Forum there.

It is crucial to remember that the National Security Council of the United States is the largest ever in the history of US foreign policy. And all of them take the concept of Indo-Pacific seriously, consistent with President Biden’s earlier warning that the US is indeed in a state of “extreme competition” with China. There is also a Pentagon review taskforce. Therefore, the assessment of Chinese political theorists is just as important on how China sees this concept through its own lens.

Some of them have referred to Indo-Pacific as “Da Bing Yang, ” the Big Pacific. This suggests that they do not want China or President Xi to be bound by the geographical parameters set by the US alone on Indo-Pacific. Nor do they want the term preferred by the US, to consolidate its security alliances with Japan, South Korea, Australia, for that matter India, even though the latter is not a security treaty partner of Washington DC yet.

With China having a good relationship with Russia, any meeting with the Biden administration in Singapore, without explaining how China and Russia’s interest can be accommodated in the Indo-Pacific region would seem discriminatory too. Therefore, the potential meeting between President Biden and President Xi is pregnant with a broad based strategic contestation of whose Indo-Pacific concept should be a dominant one; with China’s overriding preference being a world driven by multilateralism, while the US still determined to retain its strategic primacy through the hubs-and-spokes security alliances.

As of this writing, somewhat remarkably, three European powers have each developed a policy document on their concept of Indo-Pacific, in spite of the Asean Outlook on Indo-Pacific (AOIP), a document which seeks to encourage all sides to attempt their multilateralism within the context of Asean centrality. They are Germany, France and the Netherlands, based on the research of Strategic Pan Indo-Pacific Arena (SPIPA).

Not to be left out, now that Brexit is complete, the United Kingdom has launched “Global Britain’’ to return to Indo-Pacific too.

Allen Gyngell, president of the Australian Institute of International Affairs (AIIA), has perhaps best captured the seeming “omnipotence” of the concept, albeit from an Australian standpoint: “The Indo-Pacific is a framing device, not a geographical reality – its proponents shape it around their different interests. Each country has its own ‘Indo-Pacific’.

“For Australia, the idea of the Indo-Pacific makes good sense. It includes both the oceans surrounding our continent, with Southeast Asia acting as the linchpin between them. The words appeared in official Australian statements well before other leaders started using them. The idea has now been formally endorsed in documents from the Gillard, Rudd, Abbott and Turnbull governments”.

One should add, under the current Australian PM Scott Morrison, the same strategic echo is still given to the importance of the Indo-Pacific; with the added expectation that like-minded democracy such as the US, Australia, Japan and India should form the first quartet first.

Although the transition from the Trump administration to the Biden administration was chaotic, the latter has appeared to understand the dawn of the age of the Indo-Pacific. Thus the National Security advisor Jake Sullivan has gravitated to using this term.

In turn, President Biden himself has appointed Kurt Campbell as the Indo-Pacific coordinator. Ely Ratner, meanwhile would be the executive assistant to President Biden on this region, backed

by the necessary briefings. Rush Doshi, a close confidante of Kurt Campbell would be brought into the team to support the role of Campbell.

Matt Duss, the former chief of staff of Senator Bernie Sanders, would also be absorbed into the State Department; with Samantha Powers, the former United Nations permanent representative of former president Obama being part of the senior national security staff too.

Be that as it may, back in 2007, former Australian PM Malcom Turnbull has quietly not spoken a word to then the Japanese PM Shinzo Abe on the importance of the Quadrilateral Dialogue that can lead to the Quads. Neither did India speak of its strategic necessity.

While Australia and India have both missed the chance to make the Indo-Pacific concept more pragmatic and salient, as far back as 2007, all is not too late to take it forward, now that US, Australia, Japan, India, France, Germany, Netherlands, the UK, and member states of Asean each have their national understanding of what constitutes the best in Indo-Pacific strategy for them, rather than none all.

Given the scale of the pandemic in the US, the one power that can fire up the Quads will be the “Quads plus” or what the US secretary of state called a “chorus of democracy, ” in the effort to constrain the rapid rise of China in Indo-Pacific.

There are not dearth of democracies with which the US can call upon in Asean, such as Indonesia, Malaysia, Singapore and the Philippines.

The issue remains this: now that President Biden and President Xi have each spoken their mind since the former’s inauguration on Jan 20, will the new American president interfere in the Taiwan Straits?

While Secretary of State Anthony Blinken has had a frank and direct talk with Yang Jie Chi, both sides appear to agree to disagree; which means more Sino-US challenges lie ahead when President Biden has characterised the Sino-US relationship as one defined by “extreme competition”.

Come what may, this seems to be a continuation of where the Trump administration left off, with bipartisan consensus in the Congress. Thus regardless of the denial by Chinese Foreign Minister Wang Yi that the concept of Indo-Pacific is but a “flotsam” (in the ocean), the rip tides of the spacious Indo-Pacific ocean has begun to churn quite rapidly, producing various platforms of collaboration leading to outright containment.

Peace is ultimately made with one’s adversaries. A suggested summit between President Xi and President Biden in Singapore would not necessarily be a bad thing to dial down the tensions in a world still struggling with the ramifications of pandemic. — The Jakarta Post/ANN

Phar Kim Beng is founder/CEO of Strategic Pan Indo-Pacific Arena, while Clementine Bizot is a senior research fellow there.