Consumers own up to their online shopping mistakes 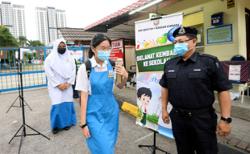 A funny mistake: What was supposed to be a life-sized holder for a toy ‘lightsabre’ turned out to be only big enough to hold a pencil. This was after a consumer failed to check the measurements stated on the online shopping listing.

IT’S not always the sellers who are to blame for online shopping mishaps.

Consumers themselves can be the cause for their own disappointment when they make mistakes shopping online.

As everything is done through a digital screen, it is easy to make a human error such as failing to read the item description in full, choosing the wrong item or getting the wrong size or colour.

Sometimes, the outcome can be hilarious, as with the case of Garreth Nyam, 31, who is a Star Wars fan.

He recalls shopping online for a holder to display his toy replica of a “lightsabre” – a sword-like weapon used by characters in the epic science fiction film.

“It was my mistake as I did not see the measurements stated in the online post.

“It looked big in the pictures. But instead of getting a life-sized sword holder, I received a really tiny one!

“The one I got could fit a pencil, ” laughs the merchandising executive.

Luckily for Nyam, he only paid about RM7 for the holder, and did not pursue any refunds.

“I kept it anyway. I’ve learnt my lesson to check the details properly first before buying stuff online, ” he adds.

Also guilty of a similar mistake, a company secretary who wishes to be known only as Julia, 37, admits it was her fault for buying a dress online that was too small.

“I was shopping for a nice dress to wear to a colleague’s wedding two years ago.

“Without thinking, I just selected my usual size, M (medium), assuming it would fit me.

“When the dress was delivered to me, it was too tight and I couldn’t wear it to the event, ” she says.

Looking back now, Julia adds that she should have checked the measurements written in the item description first.

But she bought the dress in a hurry as she was trying to use a discount coupon.

“I didn’t want to ship it back to the seller for an exchange as it felt like too much trouble.

“I bought it on sale anyway, so I donated the dress to charity, ” she says, adding that the dress cost her RM30.

For others, an attractive price tag could prove to be too distracting for them to notice the item’s specifications.

In a recent report by The Rakyat Post, a tweet went viral after it highlighted how a listing for dummy display iPhones – priced at RM23 each, enticed some shoppers to get it, believing it was a real phone.

However, the listing, found on a popular online marketplace, clearly stated that the product was a dummy for display, according to the report.

Some unknowing consumers posted negative reviews after they said the phone could not work, while others were aware it was merely a prop phone.

The price of making vaccines too expensive

From online shopping to offline let-downs