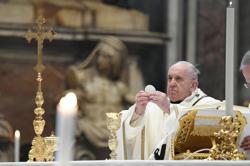 Sending off: The funeral mass for Fernandez was held at the Cathedral of St John. It was attended by only 20 people, owing to crowd restrictions under the conditional movement control order. — Photos from the Archdiocese of Kuala Lumpur

ROMAN Catholic Cardinal Rev Anthony Soter Fernandez died on Wednesday after a long battle with tongue cancer. He will be remembered for his humility, championing social justice and human rights, and keeping the interfaith dialogue strong.

Malaysia’s first cardinal was 88 years old. He died peacefully at the Little Sisters of the Poor home for the elderly in Cheras, Kuala Lumpur, after undergoing immunotherapy and radiotherapy. God’s servant: The late Fernandez is remembered as a humble and kind person.

He recalled how Fernandez knelt before him after he was ordained as a priest back in 2003.

“I was shocked that he, an archbishop (at the time), was humble enough to kneel before me. Then he kissed both my anointed palms and hugged me. He was a wise father figure and loving man, ” he said on the church’s website, stjosephsentul.org.

Born in Sungai Petani, Kedah, Fernandez was ordained as a priest in Penang in 1966 and rose to become bishop of the diocese 12 years later, where he remained until 1983.

Fernandez was appointed archbishop in 1983 by then Pope John Paul II. He was named Cardinal by Pope Francis at Vatican City in 2016.

Throughout his calling, Fernandez had a very special place in his heart for the sick and elderly, recalled Packiasamy.

“When I was based in Pahang and Terengganu, during his visits there he would ask me to take him to visit the sick and the elderly.

“In 2018, he requested me to drive him to Klang to visit a few sick people, including my late mum. He truly cared for and showed great concern for the sick and the least, ” he wrote.

Penang-based businessman JP Vincent, 59, who was Fernandez’s family friend, said he was deeply saddened by his passing.

“My late father and the cardinal were close friends from the 1950s. He used to come over to our home in Gelugor (in Penang) regularly. He was a man of discipline and great leadership.

“Due to the CMCO (conditional movement control order), I could not visit him when he was ill. Instead, church members and I used to record voice messages and videos to send to him, ” said Vincent, who replaced his WhatsApp profile photo with that of Fernandez in his Cardinal attire as a mark of respect.

He said Fernandez recalled vividly the many personal encounters he had with the late Aloysius from his early days in Penang in the 1950s.

William Albert Francis, 57, said it was a “humbling experience” whenever he came face-to-face with Fernandez at the Church of the Sacred Heart of Jesus in Kampung Pandan, Kuala Lumpur.

“As Archbishop, he used to deliver a very meaningful homily whenever he visited our parish. I used to go back feeling fulfilled and with a deep sense of purpose, ” said the retired security guard.

On Thursday, Pope Francis sent a letter of condolence on Fernandez’s passing to the Archbishop of Kuala Lumpur, the Most Rev Julian Leow Beng Kim.

In his letter, the Pope prayed for the cardinal’s “eternal rest”, expressing his gratitude for his “faithful witness to the Gospel, his generous service to the Church in Malaysia and his longstanding commitment to the promotion of ecumenism and interreligious dialogue.”

Among those who attended his wake at the Cathedral of St John in KL were Bukit Mertajam MP Steven Sim and Seputeh MP Teresa Kok.

His funeral mass was held at the Cathedral of St John yesterday. Owing to restrictions under the conditional MCO, the mass could only be attended by 20 people,

The proceedings were followed by thousands of Malaysians and Catholics around the world via live-streaming.

The funeral mass was presided over by Leow, and attended by Fernandez’s family members and other representatives of the Archdiocese of Kuala Lumpur.

“True to his simplicity and humble nature, Cardinal chose this time of the CMCO to leave us, ” Leow said.

“He shied away from publicity but never responsibility. We will all miss him dearly, ” said Leow.

As befitting a Cardinal and church leader, Fernandez was buried in a crypt in the cathedral, next to the first Archbishop of Kuala Lumpur, Tan Sri Dominic Vendargon. 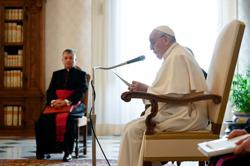