IN the six years he has lived in Malaysia, never has Rohingya refugee Rahman felt as unsafe as he does now.

The 27-year-old activist has even deactivated his social media accounts because of the hate and threats that have been spewed out against the Rohingya.

"We can never be ungrateful to Malaysia. I can only thank Malaysia for allowing us to stay here. Please don't hate us," says Rahman, who does not want to use his full name for fear of his safety. His real name and picture have been circulated on social media with hate messages.

Rahman says Malaysia has always been at the forefront of championing his people’s cause for many years.

However, recently, a couple of petitions have sprung up online demanding that the Rohingya be deported from Malaysia and that their problems should be resolved by Myanmar. One petition gathered more than 20,000 signatures but was later removed because of reported hate speech.

They are from the state of Rakhine in western Myanmar where they are considered stateless and often subjected to arbitrary violence and forced labour. Out of desperation, they have fled the country in waves, making dangerous sea journeys to Bangladesh as well as Indonesia, Malaysia and Thailand.

Rahman is genuinely afraid that the Rohingya here will be deported, although the question is where they would be sent.

He says that ultimately, he wants to go back to Myanmar but it isn’t safe to do so now.

"I have no idea whether I will be able to go back. I just hope I can go back to my hometown with full rights and dignity one day," says Rahman.

There has been a surge of animosity against refugees in Malaysia since the enhanced movement control order (MCO) was imposed in several hotspots in the Klang Valley, notes civil organisations Mercy Malaysia, Islamic Medical Association of Malaysia (Imaret) and Malaysian Relief Agency (MRA).

Alarmed by the increasing hate speech against refugees, particularly the Rohingya, the organisations issued a statement asking Malaysians to show some empathy for them during this health crisis.

"As the month of Ramadan dawns on us, we hope and pray that Malaysians will bestow some empathy and mercy upon all refugees, including the Rohingya, (and see them) as fellow humans sharing the same space that God has bestowed upon us all.

"Refugees did not choose to leave their country to seek greener pastures in other lands. Most risked their lives and that of their families escaping their own countries.

"They are not here because they want to be but because they are unable to go home, hence the oft-used term used to describe the Rohingya as ‘stateless’ people," they said in the statement.

They added, as Malaysia is not a signatory to the 1951 Refugee Convention, the country does not have a legal framework regulating the status and rights of refugees. This simply means that refugees are regarded as illegal or undocumented migrants, and they do not have legal access to employment, education, healthcare or protection.

"This failure to accord refugee status has resulted in more harm than good, where there is no administrative framework for the implementation of refugee law nor protection laws that recognises and acknowledges their presence in this country.

"As the saying goes, you cannot improve what you cannot measure. Until and unless there is a way to identify, map and coordinate the movement of Rohingya in this country, there will always be suspicions and misconceptions about them as a community," they noted.

The consortium of medical NGOs also pointed out that despite the challenges they face in the country, refugees have been taking care of their communities, aided by NGOs, so as not to burden the government and Malaysians.

"Much of their sustenance is provided on a humanitarian basis, supported by foreign funding and UNHCR, not the Malaysian government as most people assume," they stated, adding that during this Covid-19 pandemic, some refugee communities have gone the extra mile to assist frontline health workers by producing PPE (personal protection equipment), while others actively disseminate information or assist health workers to conduct screening in their community.

"The refugee and Rohingya issue in Malaysia does not go away simply with a petition to ‘Say no’ to them. Rather than idealistically trying to wish them and their problems away with a magic wand, we need to tackle the problem heads-on, solving one problem at a time, focusing on their potential threat of being a Covid-19 hotbed," they said, commending the government’s decisive action of identifying their cluster and moving in with mass screenings are to be lauded, for the overall good of all Malaysians.

"If not quickly identified and treated, infectious diseases such as Covid-19 will continue to fester and spread not only among the refugees but to our countrymen," they noted.

The online hate against the Rohingya began appearing after Malaysia was criticised for denying entry to a boat trafficking Rohingya into the country on April 16 to protect the country against imported cases of Covid-19. It was escorted beyond Malaysian waters after its supplies had been replenished.

According to the Malaysian Maritime Enforcement Agency (MMEA), there have been many attempts made by undocumented immigrants to enter the country by sea during the MCO period.

A lot of the hate has been directed specifically at Zafar Ahmad Abdul Ghani, who heads the Myanmar Ethnic Rohingya Human Rights Organisation Malaysia (Merhrom).

Viral social media postings claim that Zafar Ahmad demanded that the Rohingya be given Malaysian citizenship and that he also insulted locals.

Zafar Ahmad has posted a video message online denying that he made that demand and saying that the Rohingya have always been grateful for the support shown by Malaysia, which has pressured Myanmar to stop the genocide in Rakhine.

“When the genocide there has stopped and we are accepted as Myanmar citizens, we can go back to our country of origin," he says in his message.

Syarifah Syakirah, a Rohingya who was resettled in the United States eight months ago can attest to her people’s love for Malaysia. In an email interview, she says that growing up in here, she learnt to speak Malay well and even adapted parts of Malay culture into her everyday life.

"If that’s not sign of love and respect then what is? In short, we are really grateful to and love Malaysia and its people," says the founder of the Rohingya Women Development Network.

She also says that it is a misconception that the Rohingya want Malaysian citizenship and that all they ask for is shelter and basic human rights. 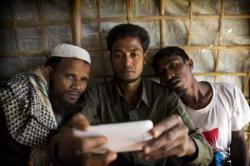