Students on schooling in the ‘new normal’

Alyson: There exists an intrinsic quality in us to be adaptable.

“EXAMS are just around the corner,” I was told but my school kept postponing our mid-term exams in the hope that we would be able to sit for the papers from our school desks.

After several months of uncertainty, my school finally surrendered to reality and announced that we would be having online exams instead.

We were far from thrilled; some of us were hoping for an exam-free year.

Days before the start of our virtual exams, held from June 28 to July 2, I tested out the best place in my house for Internet connectivity and ensured my phone and laptop were fully charged.

I even considered bribing or threatening my family members to not distract me while my exams were in session.

On the first day, I moved all my equipment to the living room to get the most out of my WiFi bandwidth. Since the chances of a student cheating were thought to be higher in an online exam, my school enforced stricter rules.

We had to be “in class” 30 minutes earlier than usual and two devices were required to be turned on at all times – one to view our faces, and another to view our desks and what our hands were up to.

And if that wasn’t enough, we also had to keep our microphones turned on throughout the entire span.

I signed in to my virtual classroom via Google Meet to see my classmates looking just as anxious as I was.

Exams on their own were terrifying enough but the foreign concept of having them through a screen made them even more so. But this was the new normal.

As the exam commenced, I was able to stay focused fairly well. Instead of being an unpleasant disturbance, the background noise from my classmates’ microphones recreated some kind of classroom atmosphere. Initially, I thought we would only have multiple-choice questions but teachers remained dedicated and it was still possible to submit a two-page essay online.

I was unusually slow and had trouble completing my test paper on time, as I still only typed with two fingers and had yet to pick up the correct way of typing.

However, an astonishing half of the class managed to submit their papers faster than during a physical assessment. This completely caught me off guard. Perhaps they had e-games to practise with?

My irrational fear of being suspected of cheating escalated because all online exams were screen-recorded.

I wondered if my uptight body movements raised suspicions among the supervisors. The truth was that I just wasn’t used to an online exam yet.

Before we knew it, the week was finally over. I turned in my last paper and immediately felt a huge wave of relief wash over me.

All in all, the experience wasn’t nearly as bad as I had anticipated it to be. We thankfully didn’t come across any major problems – my dad upgraded our home’s Internet connectivity.

This shows that even though we usually grumble about change, there exists an intrinsic quality in us to be adaptable.

As a bonus, I now prefer to type out my essays, instead of writing them!

Although I’m glad that I was able to transition into the realm of e-learning, I eagerly await my return to the classroom learning environment I’m most accustomed to, for nothing can replace the engagement and interaction among teachers and students in physical classes. – By ALYSON WONG, 15, Kuala Lumpur Charis: Our school felt like home, thanks to Puan Anizah.

WHEN Puan Noor Anizah Jamal arrived as the new principal at SMK Che Tom in Sungai Petani, Kedah, in November 2019, she had a vision for the school which was in line with the Education Ministry’s School Transformation 2025 (TS25) programme.

She went on to carry out a makeover for the 56-year-old all-girls’ school, from the classrooms to the dormitories.

She also pushed for active participation from every student in every aspect, and constantly highlighted student achievements in the form of banners, posters and award ceremonies.

In a matter of months, we grew to see her as a mother figure and lovingly referred to her as “Ibu”.

When the first movement control order was enforced in March 2020, Puan Anizah took it up a notch in ensuring the continuity of lessons at home. She put herself in the shoes of her students and thought out of the box to make learning more enjoyable for us.

As no social gatherings were allowed, instead of completely cancelling extracurricular activities, she put a twist on them.

For instance, we had our first virtual run in place of our annual Che Tom Girls’ School (CTGS) Run. Students were encouraged to submit videos of themselves jogging around their neighbourhoods, with medals and certificates to be won.

And when it was time to celebrate Hari Raya, albeit from home, Puan Anizah had no plans to stop the fun. 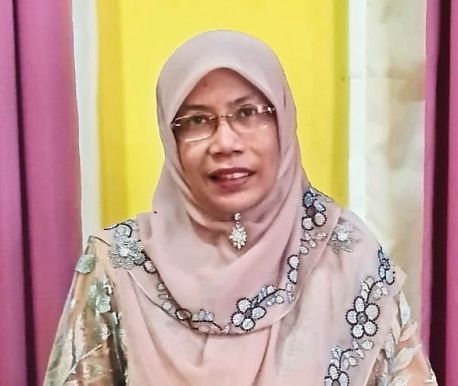 Making a difference: Puan Noor Anizah thought out of the box to make PdPR more enjoyable for her teachers and students.

The school organised a creative video and photo collage challenge, which saw students spreading the festive spirit by sharing what they were up to during the celebration.

To keep both teachers’ and students’ spirits up, Puan Anizah came up with ideas such as the Teachers’ PdPR Corner and the Students’ PdPR Appearance Challenge.

Our teachers sent in pictures of their workspace from home while students attended online classes in school uniforms. These initiatives received positive feedback as they helped bring back the atmosphere of traditional schooling.

When schools were allowed to reopen for the first time, many changes were made to accommodate the standard operating procedures.

As the Sijil Pelajaran Malaysia (SPM) 2020 was nearing, extra classes were conducted as a final push for the candidates. During these extra classes, teachers prepared simple meals for us every day to prevent us from skipping meals.

The school even had a Food Charity Corner where those in need could pick up a few packets of biscuits and snacks. And on the last day before the start of the SPM, Puan Anizah surprised us with several cakes and gave us much-needed motivation.

Knowing that the SPM 2020 batch had an experience no other had gone through, Puan Anizah and the school’s counselling unit organised a Google Meet last June where my batchmates and I had a sharing session with current Form Five students.

Sadly, as a result of another transfer, Puan Anizah left the school on Aug 1. I’m sure the school community would agree with me that we’re immensely grateful to Puan Anizah for her efforts in making our school feel like home during her short stint. – By CHARIS CHIANG, 18, Kedah

Both Alyson and Charis are participants of the BRATs Young Journalist Programme run by The Star’s Newspaper-in-Education (Star-NiE) team. Throughout the year-long programme, participants aged between 14 and 22 from all across the country experience life as journalists, contributing ideas, conducting interviews, and completing writing assignments. They get to earn bylines, attend workshops, and extend their social networks. To join Star-NiE’s online youth community, go to facebook.com/niebrats.

Doctor, doctor: Identical twins graduate together with medical degrees
Why some Malaysian youths are going bankrupt - Insolvency Dept: Over 20% of bankrupts are youths
How young Malaysians can avoid being poor
‘Teach us how to manage money wisely’
PENINSULA COLLEGE FULFILS EDUCATION
Royal plan to ‘future-proof people’
Urgent need for reform
How to conduct a parent-teacher meeting
Cash, laptops to aid community
M’sian teens pen their way to the top