LEARNING at home is not without its challenges but with help and support from their families, students would be better able to cope with lessons outside the classroom.

Sadly, this is not the case in Malaysia where family members were not always involved with children’s home-based teaching and learning (PdPR).

A study done by Universiti Malaya (UM) found that 86% of secondary school students reported studying on their own, at least some of the time, during the many school closures they faced over the past one and a half years.

“Despite the early intervention and a wide range of activities and services introduced under the PdPR scheme, there is growing concern about its effectiveness,” said UM Faculty of Economics and Administration Prof Dr M. Niaz Asadullah, who conducted the study.

“Beyond the issue of digital and technology access, not much attention has been given to the role of parents and the challenges at home,” the education economist told StarEdu.

The “Home Schooling during the Covid-19 Pandemic in Malaysia” study, which was completed in January, will be presented at a conference jointly organised by the Asian Development Bank and the Institute of Southeast Asian Studies (ISEAS)-Yusof Ishak Institute, National University of Singapore, this Wednesday.

The reason for the lack of assistance at home, Prof Niaz said, could be due to economic distress and livelihood-related issues as respondents revealed there was a significant loss of family income due to the movement control orders.

“The other and more likely possibility is that for the vast majority of children, particularly those from B40 families, most learning activities have almost always been organised by schools.

“So the sudden shift in educational responsibility from school to family may have overwhelmed parents.”

The study was conducted on Instagram with over 6,800 bumiputra secondary school students giving their take on the efficacy of PdPR.

The study also revealed that 24% of students attended PdPR irregularly, while 22% did not even show up for lessons.

“This could be due to lack of support from parents, increased household chores, loss of motivation, digital divide, and absence of proper monitoring by teachers.”

Besides having someone guide a student, the success of PdPR partly hinges on having a functional and complementary learning environment at home.

“A physical space with lots of books in some way mimics the study environment one experiences at school.”

Prof Niaz added that another 24% said they had to share digital access with other family members, which could be linked to poverty faced by the B40 community.

“Children from B40 families are more likely to report having to share their devices.On the other hand, students from well-off families have access to alternative forms of education including online private tutoring, and capable and literate parents at home.”For those with devices at home, 73% used either computer, laptop or tablet for learning during school closure and nearly all students (95%) used the mobile phone for educational purposes.

One reason was a large number of these Indian households had no smartphones – only about half of the households in the villages owned one.

According to the World Bank, the loss of learning happens after only a few months of school closures all around the world, especially where closures have been longer like in South Asia and Latin America.

Here, students have no connectivity, and spend at most a few hours a week following a class on television. It also found that most students living in households under the poverty line in the developing world – about the bottom 80% in low-income countries and the bottom 50% in middle-income countries – do not have the minimum conditions to learn at home.

The situation is exacerbated as they have no access to the Internet, and their parents or guardians do not have the necessary education level or time to guide the children in the learning process.

Prof Niaz, who also explored other developing countries’ variations of PdPR, said Malaysia’s PdPR programme “is timely, excellent in spirit and impressive in many ways – content creation, alternative platforms to access learning materials, provisions for offline, as well as online.”

However, he added, the implementation strategy did not take into account behavioural challenges among teachers, students and parents.

“In my opinion, this is one big reason why student participation has been irregular and a significant proportion of students (34%) expressed dissatisfaction with the quality of online programmes.”

Students on schooling in the ‘new normal’ 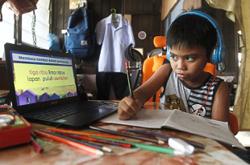