Attention, please: A teacher in an Orang Asli school conducts teaching and learning for the indigenous children. – File photo

ACCESS to education has been a constant battle for indigenous students.

Lack of awareness on the importance of education by Orang Asli parents, poverty and living in remote areas are among the contributing factors, according to a recent study conducted by the Institute for Democracy and Economic Affairs (Ideas).

The study, published on Oct 22, further shows how even the lack of paved roads hinders Orang Asli communities from sending their children to school.

In her paper titled “Educational Policies in Overcoming Barriers Faced by Orang Asli Children: Education for All”, Ideas Social Policy research manager Wan Ya Shin highlighted the need for an indigenous pedagogy in the national curriculum.

This does not mean a new syllabus but a pedagogy that is suitable for indigenous children, she explained.

Teachers posted in Orang Asli schools are faced with tougher situations compared to their counterparts in national schools, she said.

“In a study carried out in 2011 titled ‘Dropout Prevention Initiatives for Malaysian Indigenous Orang Asli Children’, researchers showed that out of the 29 respondents, 20 have less than five years of teaching experience and only one teacher was trained to teach Orang Asli children.

“Although there are courses related to indigenous pedagogy and culture, six respondents have never attended any courses.

“Even between states there is a disparity in the completion rate of education.

“A critical element for education to function as an enabler to empower children from low-income families (such as indigenous children) is the provision of quality education that can level their playing field.

“Failure to do so will result in a vicious cycle of inter-generational poverty, ” she said. While she acknowledges the government’s effort in implementing policies and programmes to address the difficulties these schoolchildren face, she believes more can be done. – By SANDHYA MENON 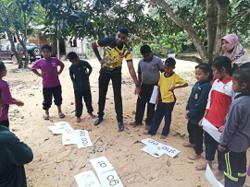